Part horror movie and part an effective study of a seriously damaged mother-daughter relationship, The Monster is yet another worthwhile horror that gets things right by ensuring that both of the main components are given the right amount of care and attention.

Zoe Kazan is Kathy, a mother driving her daughter, Lizzy (Ella Ballentine), to go and live with her father. There doesn't seem to be too much sadness about this, not from either party, and a lot of that has to do with the problems that Kathy has had with alcohol. The daughter has sometimes had to act like the parent, which has rarely been appreciated, especially when Kathy has been trying to hang on to some new asshole boyfriend. As they drive along a quiet road at night, they hit a wolf that runs out in front of them. But it seems that the wolf was running way from something. Something bigger, and much more dangerous.

Written and directed by Bryan Bertino, The Monster is so good that I'm even willing to forgive him for the awfulness of Mockingbird. It's a decent creature feature elevated by the portrait of a parent-child relationship that has already spent some time being put through the wringer, which leads to the strongest mix of love and hate that you can have in any damaged relationship.

Kazan is very good in her role, being allowed to give a performance that shows her at her worst, in a number of flashbacks were her selfish, and abusive, behaviour is shown, and also at her best. No matter how good she is, however, the star here is Ballentine, who has to consistently show a wider mix of emotions, and also a sharper mind, as the child so used to acting like the adult, with the resentment and the sadness, and maturity, that brings. There are some other characters who pop onscreen to be put in peril, but the main one is, Jesse, a roadside mechanic who has been called to the scene. Aaron Douglas gets to play this role, which is written in a slightly odd way. I'm not sure if Bertino wanted viewers to consider Jesse as a potential danger, or if he was just playing up the fact that being stuck in a broken-down car in an isolated road makes EVERYTHING seem like a potential danger, especially to a mother and young daughter. Whatever his reasons, Jesse is the one part that doesn't work as well, but that's no fault of Douglas, who does just fine.

There's not much to comment on elsewhere. The cinematography seems to have been kept slightly too dark in order to hide any flaws in the creature design (which isn't that bad, but would have been better if they had avoided showing it out in the open so often), and the music by tomandandy is far from their best work, although that is probably just my preference for some of their more bombastic numbers. The creature is interesting, imperfect in a way that still has you trying to take in some of the details, but there's really nothing else onscreen, visually, that makes a strong impression (with the exception of a very tender moment that shows Lizzy looking after her mother after some alcohol-induced illness).

Despite criticising the overall look of the film, The Monster is well worth your time. It's not a film that's wanting to give you beautiful frames and original imagery. It's a film exploring something painful and depressingly common. It's a film about parents who can act like monsters, and it just happens to also have another monster in it. 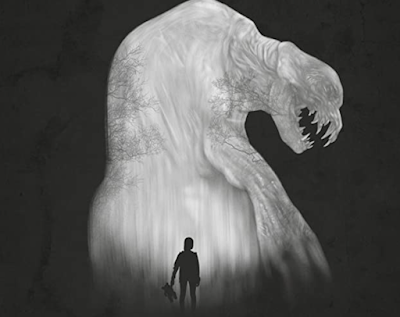