Many, many years before the name was seared onto the minds of rock fans by the mighty Def Leppard, Hysteria was title familiar, perhaps, to fans of Hammer movies. An enjoyable, twisted thriller from the studio, Hysteria is a movie that I enjoyed a hell of a lot more than I was expecting. It's also, in my opinion, a film that seems to have influenced the much more recent Trance.

The story revolves around Chris Smith (Robert Webber), a man who is undergoing treatment after an accident has left him with a severe case of amnesia. His treatment is being paid for by a mysterious benefactor, but perhaps that treatment isn't entirely succeeding, judging by the voices that he starts to hear in a nearby apartment. Chris starts to worry about his sanity. He's a man fraying at the ends, but does that mean he could end up murdering someone. Or has he murdered in the past? Perhaps that's what his brain is not letting him remember.

Written by Jimmy Sangster, and directed by Freddie Francis, this is really good stuff from start to finish. The lead character is someone viewers end up sticking with, despite the fact that suspicions arise that he may not have been the nicest guy ever in his past. This is ambiguous, but nicely done, and the plot reveals are well done and, within the context of the film, plausible.

Webber does well in the lead role, understandably frustrated as he struggles to remember his recent past, and there's decent support from Anthony Newlands, Jennifer Jayne, Lelia Goldoni and Peter Woodthorpe, but it's Maurice Denham who threatens to steal the movie as a seemingly mild and passive private detective who can handle himself with ease whenever things heat up.

I'm really surprised that this isn't a better known, or more highly regarded movie. Hammer made a number of movies that could be classed as Hitchcockian, and this is one of the most entertaining. At least give it a watch some time if you get the chance, I'd like to think that more people will enjoy it once they've been pointed towards it. 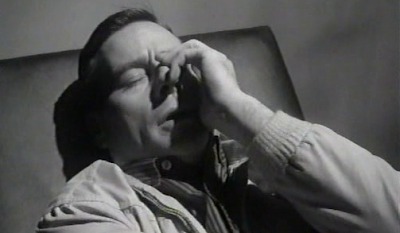