Sci-Fi September: Battle Beyond The Stars (1980)

It's hard to view Richard Thomas as anything other than the nice lad from The Waltons. He's had some other good roles, including a goodie in the beloved IT, but he's often simply noted for his niceness, which quickly becomes quite bland and ever-so-slightly irritating.

In this movie he's yet another nice guy, a young man sent out by his planet to recruit help after they have been threatened with destruction by big, bad Sador (John Saxon). Thomas picks up some allies, including a space cowboy (George Peppard), a cool loner (Robert Vaughn), and a bonkers Sybil Danning kinda gal (Sybil Danning), and then takes them home. There are seven ships altogether, ready to take on a much bigger selection of enemies.

Directed by Jimmy T. Murakami, and written by John Sayles, Battle Beyond The Stars is a sci-fi riff on Seven Samurai, the classic movie that inspired films as varied as The Magnificent Seven and A Bug's Life. Unfortunately, it misses out on the main element that all of those movies have. Despite a few plus points, Battle Beyond The Stars isn't ever as much fun as it should be. This is probably due to a disappointingly flat script by Sayles, and direction from Murakami that's workmanlike, at best. Some lively performances, and a good score by James Horner, help.

The first paragraph covers my thoughts of Thomas this time around. He's just not a great lead, especially when compared to the supporting cast. Vaughn is enjoyably cool, Peppard is a blast, and Danning puts in another wild performance that has made her a firm fan favourite through the years. Saxon hams it up as the villain, while Darlanne Fluegel is stuck with a character as bland and nice as the one played by Thomas. There are others onscreen, but they either barely register or are covered in prosthetics (Morgan Woodward) to make them pretty unrecognisable.

The pacing isn't too bad, and the special effects are okay for the time and budget (but don't expect them to have held up well over the years), so it manages to avoid being a bad movie. It's just a shame that it also manages to avoid being a very good one. During the many moments without Peppard, Vaughn or Danning, the whole thing just starts to sink when it should be easily soaring from one set-piece to the next.

I'm sure that people who saw this back in the early '80s will always have fond memories of it. We've all got films like that. But even those who have great affection for it will, I think, struggle to overlook all of the flaws when revisiting it today. They'll like it more than I did, but I doubt it will appear on any Top 10 lists. 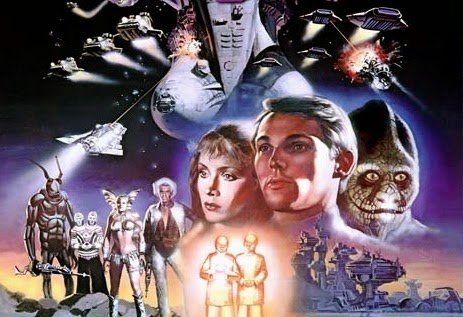