A lot of people love Total Recall, the 1990 movie directed by Paul Verhoeven that provided Arnold Schwarzenegger with another hit at the box office. I am one of those people. Which makes me one of the many people who groaned when they heard news of a remake. To be directed by Len Wiseman. Now, I actually quite like Wiseman's work. He makes glossy entertainment, and I think now that people have seen the godawful A Good Day To Die Hard we can all agree that the fourth movie doesn't actually seem THAT bad. Okay, I might still be on my own there, but the point I am making is that I was willing to give this one a go.

Colin Farrell stars as Douglas Quaid, a factory worker who starts to have strange dreams involving fighting, escape attempts, and a beautiful woman (Jessica Biel). He doesn't seem satisfied with his life, which is a bit strange considering that he's married to Kate bloody Beckinsale. It must be to do with the fact that he lives in The Colony, while all of the better opportunities go to the people from the United Federation of Britain. These are the only two living spaces left on Earth, after a period of chemical warfare, and The Colony is packed with citizens viewed as the lower/working class. Quaid decides to visit Rekall, a company that can insert memories into your brain, and opts for a memory that will give him an exciting adventure as a secret agent. Unfortunately, things don't go according to plan. It turns out that Quaid may already have some false memories creating a conflict within him.

Total Recall starts off quite well. The world displayed onscreen is nicely realised and textured, Farrell, Beckinsale and Biel are all good enough for their main roles, and there are fleeting glimpses of some great actors who you just know will appear later on in the film (Bryan Cranston, and Bill Nighy). The action is solid, there's an interesting layer to the movie that focuses on class and societal manipulation, and I started to consider that this was starting to prove itself as a decent remake. A retread of material - both movies are based on "We Can Remember It For You Wholesale" by Philip K. Dick - that was able to offer up more than just a reprise of what we already enjoyed years ago.

But then it starts to lose steam. Not a major problem, at first, but after the first hour has gone by and the movie settles into a dull cycle of action-chase-paranoia-repeat then it becomes tiresome. In fact, by the time both Nighy and Cranston eventually appear it's too late. Neither man gets to make a decent impression because viewers are too busy concentrating on trying to stay awake. This kind of material shouldn't be so unexciting.

A lot of people had a hand in the writing of the movie, with Kurt Wimmer and Mark Bomback credited as the main writers, but that's not reflected in the final product. The exposition is fine, and needs to be with such ideas about identity and paranoia, but everything else is found lacking, from the lines uttered in the thick of any action to the ineffective characterisations. This is a film populated by decent actors as opposed to any good characters.

Wiseman does his usual solid job in the director's chair, revelling in the effects and showing off when he gets the chance. There's a one-shot fight sequence that manages to impress, although it doesn't make up for the lack of energy elsewhere. If only he could have maintained the quality of that first 40 minutes, this could have been a very pleasant surprise. Alas, it wasn't to be.

Beckinsale steals the show, her husband (Wiseman) knows how to utilise her well in movies, and the movie moves up a notch whenever she's onscreen. Farrell is solid in his role, putting himself across as a capable everyman with an undercurrent of Jason Bourne. Jessica Biel is, unfortunately, the worst person in the movie. It's not her fault, and I love seeing Biel in anything, but her character is horribly underdeveloped and neglected. It's almost as if she was added as an afterthought. She may be a worthy companion during the fights, but any other interactions she has with Farrell could be consigned to the rubbish bin with very little impact on the movie. Bokeem Woodbine does alright with his small role, John Cho sports a fun, blonde hairdo, and I've already mentioned the main problems for Nighy and Cranston, although the former also struggles with an American accent.

There are worse movies you could pick when you fancy a bit of sci-fi action. There are also many better ones, including the original film that this is based on. 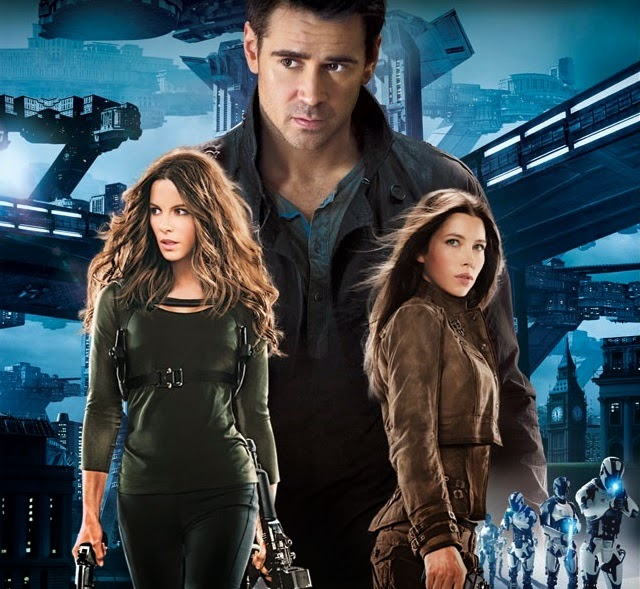