Ahhhhhhhhhh, Electric Dreams, how do I love thee? Let me count the ways.

If this movie was any more '80s then it would be delivered to every household with a set of deelyboppers, a SodaStream machine, and some legwarmers. The focus of the story is that technological wonder, a household PC, there's a small role for Maxwell Caulfield, the soundtrack features Culture Club and Phil Oakey, and Virginia Madsen has that whole '80s look working against her - as everyone else in the '80s did.

The plot is quite simple, and also quite beautiful once you get past all of the cheesy trappings. A young man (Lenny von Dohlen) gets a home PC and starts setting it up to improve his life. He does this by becoming a technical whizz in mere moments, despite knowing very little about the latest technology at the start of the movie, and then manages to balls it all up by spilling some liquid all over his new toy. The PC isn't destroyed, but it is changed. It's now different from other computers. It's more advanced, and also more curious about emotions, and even love. The fact that the new neighbour (Madsen) is an attractive young woman who plays the cello, resulting in a fantastic musical moment mixing the classical sound with a synthesised accompaniment, results in the computer getting some ideas way above its station. Well, you don't always act rationally when you're in love.

Written by the brilliantly-named Rusty Lemorande and directed by Steve Barron, this is a film that sacrifices any sense of reality in favour of movie magic. The fact that it makes this clear from almost the very beginning, probably at the time when the lead character becomes a PC expert in seconds, means that viewers can decide whether to go along with it or not. I went along with it, and am glad I did. There's plenty I could pick apart here, but it's a film that I've always had a soft spot for. Perhaps it's because I saw it back when it was first released, and will therefore always have some nostalgic affection for it, but there's enough fun to be had for those in the mood for light entertainment.

Von Dohlen isn't an ideal leading man, but he has moments when his bumbling schtick works well enough. Madsen, on the other hand, shows that she always had that star quality. She's very easy to like, and even manages to keep viewers onside as things get more and more unbelievable. Caulfield puts in another wonderful little turn, despite the fact that he's underused, and fans of Miriam Margolyes will not want to blink if they want to see her in the role of "Ticket Girl". And the main voice of the computer? It's Bud Cort. Bonus points.

As well as those artists already mentioned in the paragraph above, fans of electronic music will be delighted to hear that Giorgio Moroder contributes a few pieces to the soundtrack. The highlight is a scene that I've already mentioned, but there are other moments to tickle the eardrums of his many fans.

Think of it as a time capsule from the decade that taste forgot. Or think of it as an oft-forgotten forerunner to Her. But do think of it when deciding upon what to watch some time, even if it's just the once.

With amazing special features like, ummmm, interactive menu and scene access, Region 2 is your only option at the moment - http://www.amazon.co.uk/Electric-Dreams-DVD-Virginia-Madsen/dp/B001QXZ81G/ref=sr_1_1?s=dvd&ie=UTF8&qid=1411246123&sr=1-1&keywords=electric+dreams 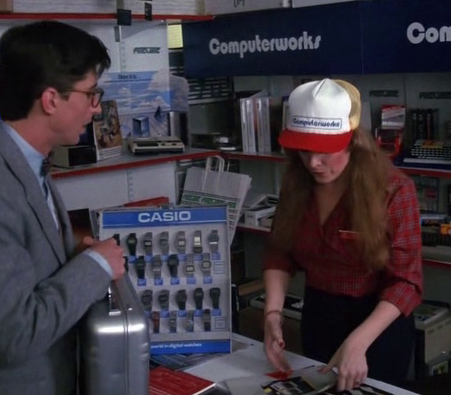