I was taken to see Dune when it was first released in cinemas. I was about 8 or 9. My mother and her partner, I assume, thought that this was going to be the next Star Wars. I can't remember every minute of the experience, but I can sum it all up in one word. Boredom.

Revisiting it now, about 30 years later, I can sum it up in two words. Interesting failure. It's still boring in places, but the visual style does keep it worth at least one viewing and there's something enjoyable about watching something so gloriously messy.

I'd attempt to explain the dense plot if I thought I could. Let's face it, the film itself has an opening narration from a young Virginia Madsen that tries to explain a hell of a lot to viewers in the space of a few minutes so I don't think a few sentences here will do any better. Let me just say that the whole movie is a bit like Dallas in space, with a magical spice replacing oil, Kyle MacLachlan as a Bobby Ewing figure (albeit one with the potential to become much more powerful than anyone else around him), and Gordon Sumner (AKA Sting) appears in a metal codpiece at one point, just to haunt your nightmares for years.

I really couldn't begin to run through the entire cast of characters and their relationships to one another. This is one dense film. MacLachlan is the lead, he's the character you get to stick closest to throughout the entire movie. His parents, played by Jurgen Prochnow and Francesca Annis, also play a large part in the proceedings. And then there's a love interest in the shape of Sean Young. The main villain is a boil-covered, rancid Baron, played by Kenneth McMillan (it's worth checking around for other articles that make the case for Dune being one of the most homophobic movies of the decade, based on that character alone).

Adapting the mammoth novel by Frank Herbert would have been no easy task, but David Lynch seemed to think he was up to it. Sadly, he wasn't. He does much better in the role of director, mainly thanks to the impressive visuals of the movie that he allows to take centre stage, but that clunky screenplay is the wobbly foundation that sets this sci-fi house of cards tumbling.

The performances often don't help either, with MacLachlan just not impressive enough in the lead role. He's an actor with a very particular style, one that works in the right roles (Blue Velvet and Twin Peaks spring to mind) and really doesn't in the wrong ones, as we see here. Sting is another weak link, and the least said about Alicia Witt's turn the better, although I don't hold that against her (she was only 9, it was her first movie role, and Lynch seems to have helped in creating the performance he required). McMillan is a lot of fun as the repellent Baron, and there's fun to be had in the performances from great names such as Patrick Stewart, Jose Ferrer, Dean Stockwell, Max Von Sydow, Siân Phillips, and Everett McGill.

There's an enjoyable soundtrack from Toto, with a decent contribution from Brian Eno, some impressive creatures from the great Carlo Rambaldi, and a few darker sequences that hint at a very different approach to the material that Lynch may have been more comfortable with. None of these things, sadly, can make up for the many problems that drag the movie down.

But at least it inspired Fatboy Slim to sample the line: "walk without rhythm, and we won't attract the worm" - allowing me to end with THIS music video 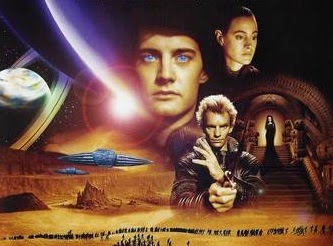