Based loosely on the aforementioned Shakespeare play, this is a movie about the crew of a spaceship landing on the planet of Altair IV. They're investigating what has happened to the last people who were aiming to visit the planet, and soon find that the only people alive are Dr. Morbius (Walter Pidgeon) and his lovely daughter, Altaira (Anne Francis). That's not to say that they're the only inhabitants of the planet. There's also plenty of wildlife, Robby The Robot, and . . . . . . . . . something else. Can the crew stay safe while the go about their mission? Can Commander Adams (Leslie Nielsen) maintain his professionalism while in the company of Altaira? And how does it all actually tie in to "The Tempest"? All will be revealed before the end credits.

Directed by Fred M. Wilcox, Forbidden Planet has everything that you could ask for from a '50s sci-fi flick. The colour cinematography is lush, the soundtrack is funky and futuristic (for the time), the sillier moments are surrounded by a great mix of smarts and fun, and the production design, from Robby The Robot to the remnants of the older civilization who once called Altair IV their home, is pretty damn great.

Leslie Nielsen may seem hard to take seriously for modern audiences, but he's fine as a solid leading man this time around. He's not the focus, however, as viewers are constantly encouraged to view Pidgeon and Francis with some suspicion, especially as things take a turn for the dangerous. Both actors do a very good job of playing their roles in a fairly ambiguous manner, allowing for a number of possibilities en route to the satisfying finale of the movie.

Cyril Hume is the main man credited with the writing of the script, and he does a great job in sketching out the main characters, perfectly pacing the movie, and allowing things to build up to a few fantastic set-pieces. The presence of Robby is a great addition, allowing for some comic relief, especially in his scenes with a cook (Earl Holliman) who yearns for a replenishment of his limited supply of alcohol, and also making it easy to cover up any potential plot holes/hurdles.

If you've not managed to see Forbidden Planet yet, then do please bump it further up your list of prioritised viewings. As influential as it is downright entertaining, you won't be disappointed. 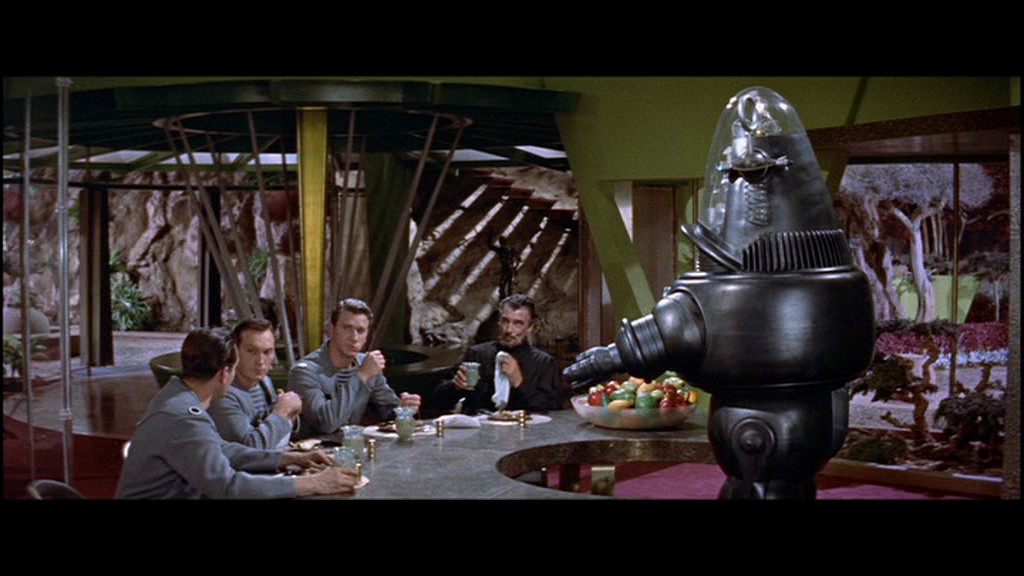