Sci-Fi September: It! The Terror From Beyond Space (1958)

It! The Terror From Beyond Space is a film that I'm often surprised isn't known by more people. Because it is, essentially, the 1950s version for Alien. Seriously, it pretty much provides a template that Dan O'Bannon and Ridley Scott tweaked to perfection to create their seminal sci-fi horror movie.

A spaceship has been sent to Mars, to find out what happened to the crew of a previous spaceship that landed there some time ago. Nine people are dead, and the only survivor (Col. Edward Carruthers, played by Marshall Thompson) immediately becomes the main suspect. He proclaims his innocence, of course, but nobody is willing to believe that some dangerous alien lifeform managed to get on board and kill everyone. Which is unfortunate, because that dangerous alien lifeform has managed to get on board their ship and is once again aiming to kill everyone.

I'm sure that nobody watched this back in 1958 and realised just how influential it would end up becoming, but that's not to say that the film isn't a little gem. I love it, thanks to the great pace and lean plotting, and think that many other fans of sci-fi horror will also find the whole thing immensely entertaining. It is, however, nothing special when you look at the component parts.

Director Edward L. Cahn has an extensive filmography of over 100 films, yet none of them stand out as classics. This one comes the closest, although I am saying that without having seen eany of his other movies, so there's a chance that he's an overlooked talent responsible for many other great movies. Writer Jerome Bixby may be a name more familiar to fans of this fare (having also written some for The Twilight Zone, Star Trek, the story that served as the basis for Fantastic Voyage, and also The Man From Earth), but I doubt he would be a major selling point either.

The cast are all capable enough, with Thompson managing to play his role without overdoing the nerves that his character would be suffering from, and Shirley Patterson, Kim Spalding, Ann Doran, Dabbs Greer, Paul Langton and others onscreen do just fine, despite one or two being underserved by the script.

But this is a creature feature, first and foremost. The main beastie may not be up there with the xenomorph from the film it would influence most, but it's an enjoyably mean, scary suit being worn by performer Ray Corrigan. Not the kind of thing to impress modern cinema audiences, it nonetheless retains a charm and presence that so many computer-generated creations tend to lack in this day and age.

Taken for what it is, this is just a delight. Taken as the film that led to the Alien franchise, it's downright essential viewing, in my opinion. 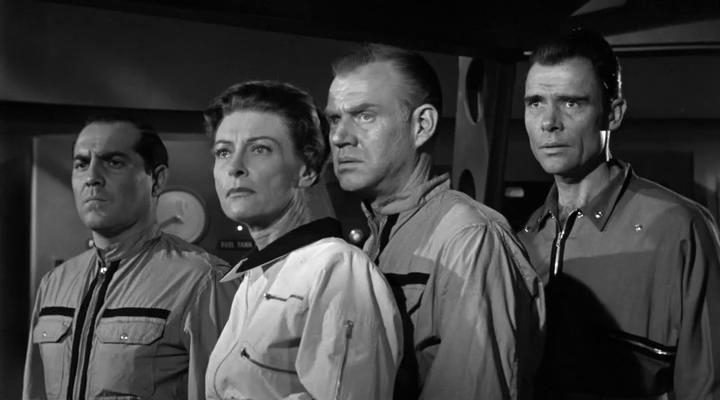 You know what you can do if you liked this review, or any of the other reviews here at For It Is Man's Number? If you share and share then every additional reader helps. Connect through Google or Blogger or any way you can, and rest easy in the knowledge that you've made little ol' me a very happy man.