Lazy movie reviewing 101 (not for the first time either) - 12:01 is, essentially, Groundhog Day given a thriller makeover. It also adds an actual explanation for the time loop that the lead character finds himself in, which is one of the plus points in a movie that has a lot of good and bad elements for viewers to deal with.

Jonathan Silverman is Barry Thomas, a fairly insignificant young man who works in an office. He admires the beautiful Lisa Fredericks (Helen Slater) from afar, and does his best to get closer to her throughout the course of one fateful day. That day doesn't end well for Lisa. In fact, it ends really, REALLY badly. Which isn't actually too bad because it turns out that Barry will wake up the next morning and find that it's the previous day all over again. That gives him a chance to get close to Lisa again, figure out what's going on, and stop her day ending so badly. IF he can convince anyone that he's not going completely mad.

Directed by Jack Sholder (you may not recognise his name, but if you're a genre fan then you've probably seen at least one of his movies), this is a potential gem of a movie dragged down by a mixed cast and the fact that it was made for TV. I'm not being unfairly down on TV movies, don't misunderstand me. I'm just pointing out that some TV movies FEEL like TV movies, and this is one of those.

Based on a short story by Richard Lupoff, the script was crafted into its final form by Jonathan Heap and Philip Morton, and it does a decent enough job of quickly setting up the many touchstones that Barry will use to keep track of his time loop. It's just a shame that a number of moments feel, necessarily, a bit rushed and hard to believe. I'm not on about the general premise, but more the way in which Barry engineers his day to get closer to Lisa on a number of occasions.

It doesn't help that Silverman just isn't all that good in the lead role. He's not exactly useless, it's just that he's not that special. His attempts at charm and humour never feel all that charming or amusing, leading to that disbelief I mentioned whenever he gets closer to the woman he's taken such a shine to. Slater has never been that great an actress, from my limited exposure to her work, and continues to stay at a level of decidedly average here. Martin Landau and Jeremy Piven, however, are both on hand to help save the day. They may be playing vastly different characters, but both men help lift up the movie whenever they're onscreen. Nicolas Surovy, Robin Bartlett and Glenn Morshower also do pretty well, although they have much less screentime.

While the film is full of little touches that drag it down, the central premise is enough to keep it above-average. The science, despite being pure hokum (from what I can tell), is sketched out well enough, the pacing is brisk enough, and the third act should please all but the grouchiest of viewers. 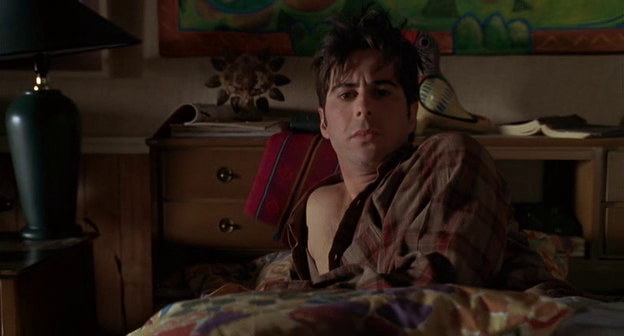