Directed by William Cameron Menzies, Things To Come is a sci-fi movie that's often forgotten when the major touchstone movies of the genre are discussed, despite being arguably just as important and influential as any other title that you could mention.

Written by H. G. Wells, who adapted his own novel into screenplay form, this is a compressed history of an imagined future. Things to come, of course. It's a film that shows the impact of a long, devastating, world war before going on to show society being rebuilt. People are, however, mistrustful in the aftermath of the war, which makes progress slower than it could be. And there's always the worry that the advancement of the human race will lead to the potential for another war.

Things To Come is a film that I first saw while in my early twenties. My love of film was already established, but not quite to the point that it is now. I would try to watch a variety of genres, try to sample some world cinema, and also try to watch movies from different ages of cinema. But I had to do so with films that would help make the journey as smooth as possible (as opposed to now, when I can happily sit down and watch anything and everything). This was a film that had a reputation for being ahead of its time, for holding up as an interesting piece of work with impressive visual style and design throughout.  That reputation was/is well deserved.

Raymond Massey does well in the nominal lead role, and there are similarly solid performances from Edward Chapman, Ralph Richardson (who plays a character that I guess you could equate with The Governor from The Walking Dead . . . . . . . . sort of), Margaretta Scott, and Cedric Hardwicke, among others.

But, while the performances are all well and good, this isn't a film that you watch mainly for the acting. Made and released in the '30s, this is a movie that seemed to eerily prefigure a few 21st century problems, such as another major war and a powerful individual motivating people to conquer others in possession of valuable fuel. Even the first few minutes of the movie, showing Massey shrugging off talk of an upcoming war as he enjoys time with friends and family, serves as a timely reminder to those watching current world events (from here in the UK we currently watch trouble unfolding in Syria, Russia, Iraq, and the constant tensions that seem to arise from North Korea). Don't forget how far things can go, and just how powerful the technology is nowadays.

Although it doesn't seem as influential today as many other sci-fi movies from the earlier years of cinema, Things To Come certainly remains an experience that should be enjoyed by cinephiles. It shows that science fiction sometimes bleeds into science fact, which is slightly unnerving when you think of how many of these movies show things going horribly wrong for us meddling humans. Of course, that's still not dissuaded the many of us who are impatiently awaiting the day when we can all travel around by either jetpacks or hoverboards. 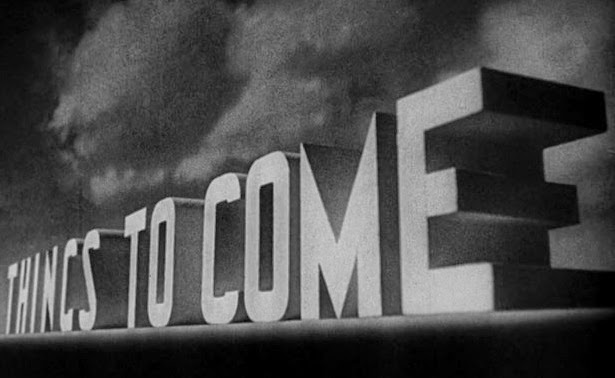