One of my favourite sci-fi movies of all time, The Day The Earth Stood Still is a film that I have loved ever since discovering it when I was still a young boy. Watching it as an adult, it seems strange to me that I liked it so much in my youth. Not because the film is bad, oh no, but because it doesn't have the usual mix of easy distractions that would have appealed to the younger me. This is a film paced perfectly for people thinking about how they would react to the situation being depicted, yet it still manages to entertain while providing plenty of food for thought.

Michael Rennie plays Klaatu, a spaceman who pays a visit to Earth one day. Not a sneaky, undercover visit, but one that's hard to miss. He lands his spaceship, walks out with his trusty robot (Gort) beside him, and announces his plans to meet with the major leaders of the world. After some initial nervousness from the main people that he speaks to, Klaatu decides to go incognito for a while, getting himself lodgings while he sets out to find one of the more intelligent human beings on the planet (Professor Jacob Barnhardt, played by Sam Jaffe). And he also has to figure out how to make a statement to the world that will display some awesome power without being viewed as an act of aggression.

Directed by Robert Wise, a man responsible for a number of classic movies in a number of different genres, this remains both a prime example of standard sci-fi from the 1950s and also something quite unique. It has a flying saucer, a big robot, and even the essential "take me to your leader" request from the main alien. Yet it also has a main alien who is completely humanoid in appearance, and also coming to see us in peace, and there's a lack of any tension and/or sheer terror that would appear in so many other outings from this decade.

Michael Rennie may not be the most charismatic leading man, but he's pretty perfect for this role. Slightly cold, just a little bit stiff in his delivery, but completely non-threatening to anyone he encounters, he really anchors the whole movie. Patricia Neal is a pleasant female lead, and Billy Gray is lively and entertaining (in the role of her son, a young boy who helps Klaatu find his way around). Jaffe plays Professor Barnhardt exactly as a professor should be played, and is another highlight in a film packed full of them.

Based on a story by Harry Bates, the script by Edmund H. North allows everything to move along briskly without ever feeling as if it omits anything for the sake of patronising viewers. Of course, Gort has become a bit of an icon, a favoured creation among lovers of the genre, but he doesn't feel as if he's there JUST to widen the appeal of the material (although maybe that's exactly why he was there - I've not read the original short story so can't say).

Last, I just have to mention the great score by Bernard Herrmann (especially as I was guilty of forgetting to compliment the fantastic, electronic score in Forbidden Planet - by Louis and Bebe Barron). Herrmann makes some great use of theremins in his wonderful score, a unique instrument that seems designed particularly for use in sci-fi movies, and the whole thing is a treat for fans of great soundtracks.

All of these words written about one of my favourite movies when all I really should have said was: absolute classic. 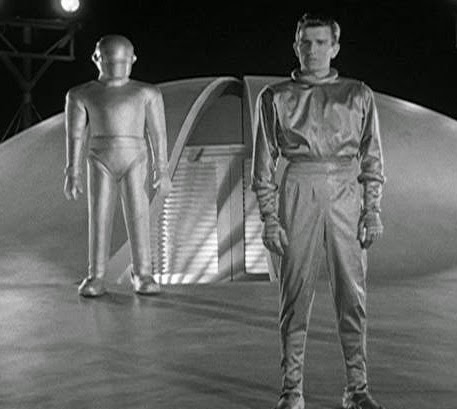