Not a film for those who can't stand insects, Phase IV is all about ants that can kill. They're not oversized ants. They're not out to attack everyone who crosses their path. They're intelligent, and it's up to scientists to figure out what their grand plan is.

Everything starts off with a cosmic event, some mysterious phenomenon that may or may not affect life on our planet. It turns out that nothing much changes, or so it seems. One man notices that different species of ants have stopped fighting one another, and have instead started to work together. A scientist (Nigel Davenport) asks for permission to head out to the main area in which this behaviour has been observed, hoping to find out what will happen next, and what can be done about it. He takes along a fellow scientist (Michael Murphy) he thinks may best be able to help him, and then starts to provoke a reaction from the ants. Which may not be such a good idea.

The one and only feature film directed by Saul Bass (the man best known for some of the best title sequences in cinema history), Phase IV was sadly given short shrift when initially released. It received some good reviews, but didn't do well at the box office at all. It's only the passage of time that has allowed the film to grow a small, but loyal, fanbase. I consider myself one of those fans, always have been and always will.

It is, however, quite easy to see why this didn't do any great business back in 1974. It's a movie that's hard to sell to people. Anyone who loved killer ant movies could see some more impressive moments in films such as Empire Of The Ants, The Naked Jungle, and Ants! AKA It Happened At Lakewood Manor. And any fans of intelligent sci-fi had an even greater pool to fish selections from. Not all of these films mentioned were released in 1974, with two of those ant movies coming along a few years after this one, but they're representative of the various movies that could cater for more traditional tastes in this particular subgenre.

The script, by Mayo Simon, is very low-key and minimalistic, in terms of spoken dialogue, but it sketches out each section of the movie without taking time out to patronise viewers. The tech is explained, even if it's only a brief explanation, and tensions arise between Davenport and Murphy, but most of the film is devoted to the actions of the protagonists, be they human or ants. One scene showing how the insects determine to overcome a particularly dangerous poison remainins a stunning highlight, thanks mainly to the close-up photography of Ken Middleham.

Davenport is a bit over the top, but his performance is tempered by the quieter turn from Murphy, making the two men good company throughout the movie. Lynne Frederick also joins them, portraying a scared woman who used to live in the area, and she does just fine, veering between moments of near-hysteria and calm acceptance of the situation.

Bass directs with an impressive lack of haste (in terms of how events unfold). He shows faith in the material, faith in the audience (which, sadly, wasn't repaid back in 1974), and faith in his own abilities. The ending may have been changed, thanks to studio interference (watch the original ending here), but what remains is still an interesting, thought-provoking, atypical final sequence that lingers in the mind long after the end credits have finished. It may be his only feature, but it's a damn fine one to have on the CV.

I encourage fans of smart sci-fi to check out Phase IV whenever they can. And I hope that one day it receives the treatment it deserves on a home cinema format. 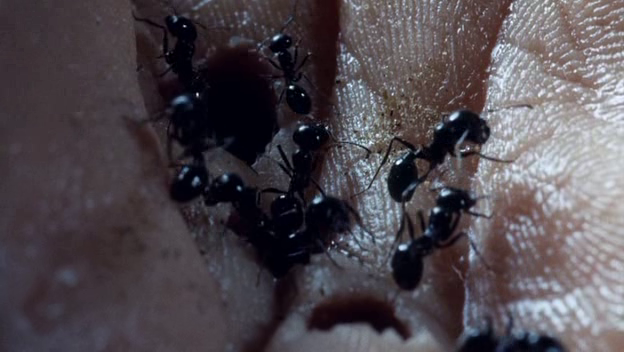