It doesn't take much time spent in my company (in real life or here on my blog) to realise that I can often be quite an easy mark for certain movies. Shark film? I am happy (usually). Zombies in the mix? I am happy (usually). Diora Baird with more than 10 minutes of screentime? I am happy. And if you make a Christmas movie that features elves, a bit of magic, and a guest appearance from Santa himself then you can usually get me drunk on eggnog, paint my nose red, and call me Rudolph. So I figured that 48 Christmas Wishes wouldn't be that bad.

The slight story concerns a couple of elves (played by Clara Kushnir and Ethan Yang) who have to mingle among some humans as they try to figure out what the kids want for Christmas. This is all because they lost a bag of post at Santa's HQ. As the elves attempt to right their wrong, they befriend a young boy named Blake (Liam MacDonald). Blake lives with his sister and mother (Madeline Leon). His father died, which creates a bit of a shadow over the usual Christmas cheeriness. Perhaps the elves can help this family unit feel like a family again.

Co-directed by Marco Deufemia and Justin G. Dyck, 48 Christmas Wishes is about as cheap and crude (in terms of the technical aspects) as you will see from even the most basic TV movies nowadays. I am not sure if the co-directors just didn't care or if they were given some kind of remit that meant everything had to be done as quickly and cost-effectively as possible. Deufemia hasn't directed anything previous to this, but Dyck has a handful of similar features to his name (which I am sure I will see one day).

Writer Neale Kimmel can also take her share of the blame. It's no excuse nowadays to say "oh well, it is just aimed at kids". Any film aimed at kids can still have decent plotting and dialogue. This has neither, with both being so shoddily put together that it's almost a miracle to see the whole thing lurch from the opening scenes to the end credits without just breaking apart and crawling off to a pit where unfinished movies go to disintegrate into nothingness.

It wouldn't be fair of me to pick apart the performances of Kushnir, Yang, MacDonald, or Maya Franzoi (playing the one elf who stays back at HQ to try and cover for the absence of her colleagues) so I won't. Franzoi is fun, the rest aren't (although Yang has his moments). Leon does okay, but is stuck in the role of lone human adult involved in the main storyline. Everyone else stays at about the same level as Kushnir and MacDonald.

Without meaning to seem like a big meanie, this feels like a film that was made by someone who wanted to reward some kids, making a movie with them that they could contribute to and show to other kids. For all I know, maybe that WAS the way things worked out. And I am pleased for them if that is how the film came about. I am just not very pleased for anyone else who ends up watching the finished product.

Here is A link, for the curious. 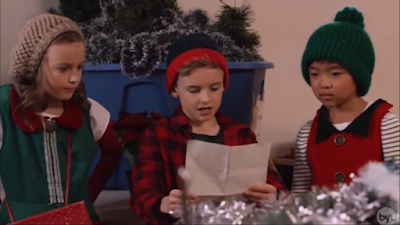