Independent movies can be a minefield for both film reviewers and genre fans, and I count myself in both camps (even if nobody else views me that way). Sometimes it can be a struggle to look past the low budget and limited resources to see the aims of the film-maker. Some people might say that any flaws still lie directly at the feet of anyone trying to get their film made, and I would agree to some extent, but it's hard to get everything in place to make a movie. Good on those who manage it, but only if they have done so with some effort made, no matter the budget or resources.

Krampus: The Christmas Devil is, for the most part, quite a bad movie. But it has enough onscreen to stop me from viewing it as a waste of my time that would make me angry.

When he was a young boy, Jeremy Duffin (A. J. Leslie) was snatched up by a child-snatching killer. He came to in a sack that had been thrown into icy water. That will do that to you. Many years later, Jeremy is a police officer and that child-snatching killer is at it again. Jeremy doesn't realise that the bad man is actually Krampus, working under the orders of Santa Claus (Paul Ferm). And he may not be the one to worry about, what with a vengeful ex-con (Bill Oberst Jr) just out of prison and aiming to take out his frustrations on Jeremy and family.

Written and directed by Jason Hull, Krampus: The Christmas Devil at least tries to do something a bit different with the familiar (perhaps too familiar in recent years?) Christmas figure. Mixing in the traumatised cop, the people who blame him for lives lost, and the dangerous ex-con all helps to make up for the fact that nothing ever feels all that developed. Some intriguing ideas are hinted at (such as young Jeremy's escape, the instructions from Santa, etc) but nothing is done with them.

Acting-wise, it's generally bad news. I wasn't impressed with Leslie, or Richard Goteri (who plays his Captain). But at least they were bad while still feeling like actual actors, unlike some projects that feel as if the cast was made up of friends, family, and those who allowed filming in their homes. Samantha Hoepfl and Erica Soto are on a par with Leslie and Goteri, but at least we get a few moments of Mr Oberst Jr being as smoothly menacing as he can be, which is a minor highlight.

Viewers will also have to bear in mind that this doesn't manage to hide the fact that it was made on a shoestring budget. The technical side of things, including audio mix and shot choices, is very rough, but at least signs of competence are shown (again, unlike certain titles I could mention).

So I can't rate this highly, there's just too much going against it to make it worthy of even an average score. What I can do is accompany my low rating with a note that you might find this one more enjoyable than I did. It's far from the worst, even in this Christmas horror subgenre, and the short runtime means that, at the very least, it doesn't take up too much of your day.

You can pick up your copy here. 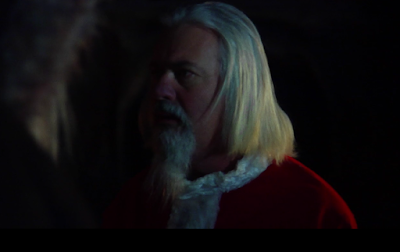