Candace Cameron Bure plays Paige Summerlind, a woman who writes magazine articles about finding your perfect man and planning your perfect wedding, and is just about to get married herself. This Christmas is a huge deal for her. She is about to meet her future in-laws (played by Barbara Niven and Michael St. John Smith) and finalise a lot of the wedding details. So having her flight diverted and delayed couldn't have happened at a worse possible time. Her situation isn't helped by being stuck in the company of the cynical (but we know there's a good reason for it, don't we?) Dylan, played by Paul Greene, and a married couple (Maxine and Frank, played by Sarah Strange and David Lewis) who alternate between showing the best and the worst of married life.

Directed by Ron Oliver, who has turned out a whole load of TV movies over the past decade, this is the usual lightweight holiday fare hampered by two major failings. First, the script by Mark Amato does nothing to make us actually root for the leads, and gives us one of the most annoying central characters I have seen in some time, in the shape of Paige. All she does is witter on about herself, her great life, and her point of view, even being introduced in a scene that has her giving money to a woman that she expects her to use to buy the latest issue of a magazine that contains the latest article from . . . Paige Summerlind. That is her introduction. Even the potential love interest is mishandled, introduced in a scene that has him advising a colleague on the importance of maintaining fresh snacks on the bar for potential customers. Maxine and Frank fare slightly better, and Paige's future hubby (played by Marcus Rosner) and in-laws feature in a scene that introduces them as people who just might not be the shining stars that they think they are. Second, and also really the fault of the script, there is nothing here to make us believe in love between any of the characters (apart from Maxine and Frank). Nothing. Apart from it being set at Christmas, obviously, which is a time for such improbable happenings to occur.

The major script issues make it hard to properly judge the quality of the acting. Bure comes off the worst, but her character is also given a lot of the worst lines. Greene just about does okay, mainly because he gets to spend a lot of the movie rolling his eyes and being the cynic who calls out Bure on all oh her sugar-coated daydreams. But everyone else does a lot better, even when playing up to the very core of their cliched characters (Strange, Lewis, and Niven, in particular), which makes the film almost bearable.

If only the supporting characters had been given more screentime, and the leads given less. Or if only the leads had been made more likeable. This could have been yet another innocuous Christmas TV movie bauble. Unfortunately, it's just bad, even when judged only alongside other Christmas movies. 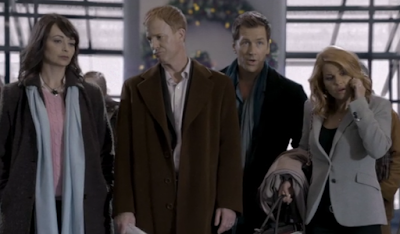