Written by Nathan Atkins, from a story he worked on with Karen Schaler, and directed by Alex Zamm, A Christmas Prince is mildly enjoyable seasonal fare that benefits from a few welcome faces filling out the cast, including Rose McIver in the lead role. It also seems to be the next in a series of films from Zamm that mixes seasonal romance with Royals and non-Royals (he has previously given us A Royal Christmas and Crown For Christmas).

McIver plays Amber, a young woman who spends her workdays editing and reworking magazine articles for little or no thanks. That may change when she is tasked with a sudden, quite substantial, assignment. She has to travel to a fictional country (I didn't note it down, but it's one of those movie countries that feels like America or the UK, but isn't, but is full of English-speaking, white people) and get the scoop on an alleged playboy Prince (Richard, played by Ben Lamb). That might prove difficult for most journalists on the case, but things become surprisingly easy when she is mistaken for the new tutor to young Princess Emily (Honor Kneafsey) and finds herself able to work on her story from a privileged insider position.

Despite the fact that it took me a good ten minutes to realise that McIver is the actress I have enjoyed recently while I watched episodes of iZombie, I was enjoying A Christmas Prince from the very beginning because of her presence. When my memory finally made the connection I started to warm to the whole thing even more, safe in the knowledge that this wasn't someone I was able to tolerate. No, this was someone I really liked. Which is a good thing, because the rest of the leads prove to be more of a mixed bag. Lamb does fine in his role, I suppose, but his character is exactly as you think he will be, and doesn't necessarily tally with the playboy image that is being reported. Kneafsey has to alternate between being a young bossyboots and being quite sweet, with the bossiness overdone initially, making her quite difficult to warm to. Alice Krige is fine as the Queen, Sarah Douglas is the stern head of the staff, essentially, and Theo Devaney and Emma Louise Saunders are fairly enjoyable as the "baddies".

Despite the lack of major surprises in the plotting, the script does at least make the expected beats and obstacles a bit more interesting than they could have been. The third act tries admirably to keep things tense, and the fact that viewers should be rooting for McIver means that it doesn't all feel too silly as she takes part in a standard "race against time" finale. Zamm does what needs to be done, no more and no less - we get lovely shots of snow-covered scenery, we get fun shining from the faces of people engaging in snowball fights, we get a number of "dawning realisation" reaction shots, and it's all paced well, and with plenty of ornaments and Christmas trimmings in almost every scene. Like so many films of this kind, you wouldn't really consider it for viewing at any other time of year, which is absolutely fine. It's not made for those other times. It is made for now, made for Christmas, and it works very well in that regard. 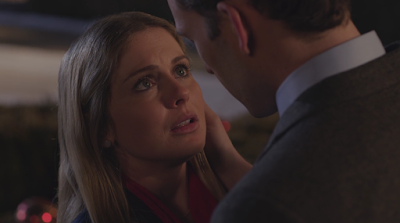