Better Watch Out is the kind of film that you will enjoy more if you know very little about it. So, with that in mind, I am going to be very brief and vague in my plot summary. Briefer and more vague than usual, anyway.

The basic plot revolves around an attractive babysitter (Ashley, played by Olivia DeJonge) and her doting charge (Luke, played by Levi Miller). The two find themselves being terrorised by a dangerous stranger who has managed to cut off the phone lines AND the internet connection, leaving Ashley and Luke completely cut off from anyone who might be able to help them.

Written by Zack Khan and Chris Peckover, with the latter also taking on the directing duties, Better Watch Out is, as so many others have already said, a gleefully dark dance through Home Alone territory. If Kevin McCallister had been using baseball bats and guns instead of Christmas decorations and toys then you would see even more similarity. But it's also the differences here that make this such a fun film, as the script starts to play with and subvert the preconceptions that it deliberately planted in the minds of viewers. In fact, before even seeing one frame of the film you may have already seen the tagline: "You might be home but you're not alone."

Cast-wise, this is pretty spot on. DeJonge is believable as a babysitter that a teen lad could fall for and also someone who could be plucky and resilient when the need arises. Miller is a typical teenager, in many respects, and his performance is pitched perfectly between youthful silliness and extreme irritation. Ed Oxenbould is less annoying here than he was in The Visit (although I know a lot of people liked him in that role), playing Garrett, a friend of Luke, and there are solid supporting turns from Aleks Mikic, Dacre Montgomery, Virginia Madsen, and the ever-watchable Patrick Warburton.

Yet, due to a few different factors, this ends up not fully realising the potential that Khan and Peckover have buried at the heart of everything. It's hard to pinpoint all of the minor flaws that stop it from being something truly great but at times it isn't as much fun as it should be, at other times it isn't as nasty as it could be, and throughout many scenes it isn't quite as smart as it would like to be.

It's also unfortunate that a delayed release now has this coming out here in the UK just a couple of months after the superior The Babysitter (which has similar subversions to standard "babysitter in peril" movie tropes, although it lacks the extra fun of the Christmas trimmings). That film was sharper, funnier, and more violent (but only just), and it's a shame that Khan and Peckover didn't develop their screenplay much further beyond the Home Alone rope-a-dope.

It's still well worth a watch though, and I'd recommend picking it up when it gets a shiny disc release. Because it's always good to have even more options for your Christmas viewing selection.

UK folks, get your Home Alone fix here.
US readers can get a similar set here.
Citizens from elsewhere... I'm sorry, I can't create links for every national outlet (I would if I could, honest). 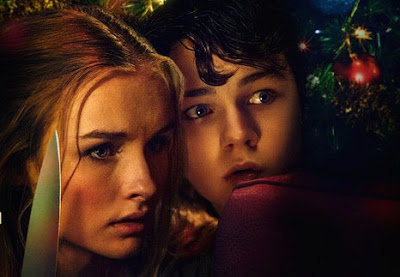