Briana Evigan plays a princess, Katie, who escapes from the busybodies around her to spend an enjoyable day in New York. Unfortunately, she is robbed, losing her handbag and a camera, the latter of which was a very special gift that she had managed to keep hold of for years. But she does get to meet a nice guy named Jack (Paul Campbell). The two of them enjoy the company of one another, Katie gets to meet some interesting people while she tries to evade those who are growing more frantic in their search for her, but can things have a happy ending for two people from such very different worlds?

Compared to many other Christmas TV movies, Once Upon A Holiday doesn't feel as if it is exactly overflowing with the spirit of the season. It has a number of Santas involved in one or two scenes, and people are occasionally shown to be celebrating in a festive manner, but the whole thing really feels like a "rich person pretending to be just like normal folks" plotline that was given a minimal addition of tinsel and holly to allow it to qualify for the Christmas schedules.

Between them, director James Head and writer David Golden have a good deal of experience working within the parameters of TV entertainment, but you wouldn't know that from this particular example. It has the comforting familiarity to it, in terms of the way thngs play out, but it doesn't do enough to make it all that enjoyable, despite the bonus of having Evigan in a lead role.

Speaking of Evigan, this winning performance serves as another reminder for me of the puzzling way in which her career seems to have halted before it even really took off. The same actress who was eminently watchable in Burning Bright, Step Up 2: The Streets, Sorority Row, and Mother's Day, to name the main titles that I have seen her in, remains eminently watchable here. But I can't think of the last time that she had a role worthy of her personality and presence. The rest of the cast aren't on her level, although Campbell tries hard to be acceptable as the standard safe, nice and sweet guy who our leading lady could find happiness with. Briana's father, Greg, does decent work with his limited screentime, Jay Brazeau is the sorta-Santa figure of the piece, and that really covers the supporting turns worth mentioning.

It's a real shame that this is so bland throughout, with the exception of Evigan. It never feels as if there are any decent stakes involved and there just aren't nearly enough gratuitous Christmas moments shoved in to make it all more appealing. 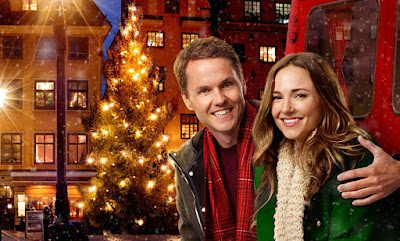