Written, directed, produced, and edited by Mike McMurran, Secret Santa is a lo-fi Christmas horror movie with a low budget and some high spirits. While it doesn't quite do enough to make you forget you're watching an independent film with barely enough going on to fill out the brisk 78-minute runtime, it is most definitely a fun time for slasher movie fans.

Not much time is wasted, with viewers introduced to someone in the opening scenes who is about to be despatched in an entertainingly messy death scene. Then it's time to introduce some more characters and turn up the sense of menace as more people start to receive Secret Santa gifts, a sign of their impending death (with the gift being used as the murder weapon, in a nice twist). What is motivating the killer, and who will be left by the time the end credits roll?

For people of a certain mindset, this film will be a lot of fun. The low budget is put to good use (with a lot being saved by most of the action taking place in one location, I would assume), the cast all have a good idea of where the performances should be pitched, and the gore, when it is shown, is very impressive, with an undoubted highlight being a bathtub scene that is as brutal and bloody as anything else I can think of right now.

And it's fair to give McMurran a lot of the credit for that, but it's also fair to give him some amount of flak. Because not content with letting the film get by on the strength of the performances, script, and the gore moments, he also feels the need to give the whole thing a "grindhouse" feeling, adding scratches and blemishes digitally to make it all look as if it was shot on film. If I'm wrong, and it has been known from time to time, then I will be happy to stand corrected by someone with more information (Mike, feel free to comment if I am talking out of the wrong end of my body).

Annette Wozniak is an appealing lead (and provides some titillation in the scenes that show her making money from her webcam job . . . without actually SHOWING her making money from her webcam job), Brent Baird is fine, Geoff Almond and Keegan Chambers are both quite amusing, and everyone else does well, mainly because of everyone being on the same page with the aforementioned pitching of the performances.

It sometimes feels as if there are just as many Christmas horror movies as there are standard Christmas movies, which is a bonus for those like myself who love both the horror genre and the yuletide season. But the downside of any subgenre being so popular is that you will inevitably also get a lot of bad with the good. Just ask any vampire or zombie movie fan. Secret Santa is one of the good ones. I look forward to seeing what McMurran does next, and hope it's as enjoyable as this.

Secret Santa is/was available on Amazon Prime at the moment. Or you can seek safer holiday fare.
Here is a large selection of Christmas movies to enjoy.
And American elves can pick the same set up here. 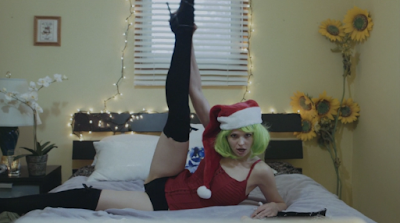