In the interests of full disclosure I have to start this review by saying that this was my first Madea movie. I checked with a friend to find out if I could/should view this one without having seen any of the others and was given the okay (cheers Kieran). And I WILL check out other Madea movies. Not because this one was fantastic - it wasn't - but because I am now fascinated with seeing how Tyler Perry puts his creation into different scenarios.

Having first appeared in a number of stage plays (about half of which have since been adapted into movies), Madea is an elderly African American woman with a hellish attitude, brutal honesty, and the ability to overreact to many minor incidents while staying calm in the face of more emotional moments. This is what I have gleaned from one film anyway. And she is played by Tyler Perry.

Now that we both know a bit about the character, let's move on to the plot of the film. Madea ends up heading along with Eileen (Anna Maria Horsford) to visit Eileen's daughter, Lacey (Tika Sumpter). Lacey has to hide the fact that she is married to a lovely young white man (Conner, played by Eric Lively), pretending that he is her helper, and is also facing trouble at the school she works at, struggling to help fund local Christmas celebrations that will allow the kids to shine. One of those kids is extremely bright, much to the delight of his mother (Alicia Witt), although his father (Chad Michael Murray) has more immediate concerns about his farmland and struggle to make ends meet. Oh, and Conner's parents (Larry The Cable Guy and Kathy Najimy) are about to visit.

Yes, that was me trying to be brief with the plot description there, but there's a lot more to mention. The character played by Chad Michael Murray spent many years bullying the character played by Eric Lively. The funding for the local festivities comes with a number of strings attached. There's a random Ku Klux Klan meeting gag. And so much more.

Although I have no other experience with this character, or these plays and movies, A Madea Christmas gives me the distinct impression that Tyler Perry likes to stir plenty into the pot, all the while having his female creation ready to take centre stage whenever necessary. She doesn't necessarily solve any, or all, problems but she enables others to find their own solutions. And she does this by cutting through any bullshit, in between scenes that have her either throwing her weight around and cussing or spouting some tiresome homely wisdom.

The acting ranges from soap opera levels (Murray and Horsford can't overcome the poor writing) to the genuinely good (Perry, despite the broad comedy of the character he plays, is great in the lead role, and other very good turns come from Sumpter, Lively, Mr Cable Guy, Najimy, and Witt), and the direction is solid, if deliberately leaving aside any flash and sizzle in favour of simple camerawork and scene set-ups.

The big problem here is the script, veering between comedy to earnest drama back to comedy again like some drunk driver heading along an empty four-lane stretch of highway while searching for the packet of cigarettes he just dropped under his seat. One or two moments work while mixing the two - particularly a revelation and clearing of the air scene in the third act - but most make you feel as if you're watching two different movies that were dropped en route to the editing department and then just spliced together into one ill-judged hybrid.

So there you go. Feel free to take this review with a pinch of salt. And whenever I see my next Madea movie I can find out if my initial impressions were correct, or if her character is better suited to some of the other adventures that Tyler Perry has created for her.

Here you go, my American friends, buy it here. We have a lot less available to us here in the UK, which may not be a bad thing. 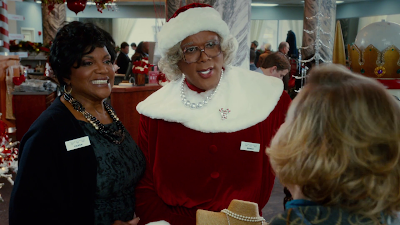