"Two households, both alike in dignity, In fair New England, where we lay our scene, From ancient grudge break to new mutiny, Where civil blood makes civil hands unclean. From forth the fatal loins of these two foes, A pair of tree-cross'd lovers find each other in life; Whose misadventured piteous overthrows, Do with their larking about hope to bury their parents' strife. The fearful passage of their Christmas-mark'd love, And the continuance of their parents' rage, Which, but their children's stern rebuke, nought could remove, Is now the two hours' (with sponsored adverts) traffic of our stage; The which if you with patient ears attend, What here shall miss, our toil shall strive to mend."

Apologies for butchering the words of Shakespeare there. I am no mighty bard, and could do no more than change a few words here and there to serve as an introduction to The Spruces And The Pines. But I had to make the effort, because this film is a reworking of Romeo & Juliet, with the action moved from Verona to a small town that contains a couple of Christmas Tree Farms. Rick Spruce (Nick Ballard) has turned up to work at one farm, for his uncle (Ken Cheeseman). Julie Pine (Jonna Walsh) has turned up to work at the other farm, helping out her father (Tom Kemp). The two find themselves attracted to one another before realising that they shouldn't, leading to a troubled time as Julie tries to convince Rick that they can't get involved . . . for all of ten seconds. The rest of the movie involves the two of them getting on just fine until their respective patriarchal figures discover just what has been going on, immediately forbidding their blossoming romance.

While there's enough here to enjoy at the right time of year, just, The Spruces And The Pines is a film that takes that most famous tale of forbidden love and dilutes it, one cup of mulled wine at a time, until it barely resembles the source material it stemmed from. This would seem to be the fault of screenwriter Marcy Holland, although I suspect that nobody will start viewing this and expect it to end in a depressing finale involving poison and death. Director John Stimpson doesn't help much, relying on the leads to carry the material, without having leads who are quite up to the task.

I'm not saying that Walsh and Ballard are bad. They're just not great, and they never sell any of the more serious moments, as infrequent as they are. They're enjoyable enough in the lighter moments, and you get musical interpretations of a classic holiday song accompanying a montage to help win you over. Cheeseman and Kemp are even more hampered, in some ways. They have to stay feuding rivals throughout, being angered with each other for the silliest of reasons. Sarah Fischer and John MacGregor do slightly better, as Holly and Josh, two friends of the main characters who see the growing love and are always available to help with pranks and any scheming.

On the plus side, this is slightly different (but only slightly) from the multitude of other Christmas movies being shown on rotation at this time of year. That doesn't make it necessarily better, I'm afraid, but at least it can give you a break if you have already had your fill of Santa, elves, or sad children needing to find the kind of gift that can't be placed under a tree. 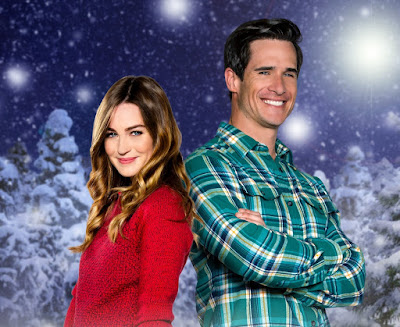