Yes, it's time for another bright and breezy Netflix Christmas movie. This time it's the tale of a young heiress (Ellen, played by Eliza Taylor) who, desperate to prove to her father that she can do more than just be photographed partying and being sociable, ends up in a small town, with no credit cards, only $100 to her name, and forbidden to reveal her true identity. She finds herself most often in the company of a young man named Jake (Jake Lacy) and ends up helping him, in return for her room and board, while she sees how he tries to help others.

Written by Dinah Eng, who currently only has this and Reluctant Nanny in her list of credits, and directed by Ernie Barbarash (who has a much more varied background in his filmography), Christmas Inheritance checks a lot of the boxes that you want checked in this kind of thing. It's also, like most of these movies, simple enough to watch with one eye as you wrap presents, yet also fairly engaging and enjoyable.

The leads help immensely. Lacy was already familiar to me, after his stint on The Office, and he does just fine here, being the typical Christmas movie male lead who has an appeal that starts to show under a thawing exterior, appropriately enough. I don't think I have seen Taylor in anything before this. She's a lot of fun in a role that you can easily picture being given to someone like Reese Witherspoon or Emma Roberts, for two very different interpretations. Taylor falls in between the two nicely, not as cloyingly sweet and nice as the former and nowhere near as cool and potentially scathing as the latter. And you have Andie MacDowell not being too annoying in a supporting role, as well as Neil Crone (playing Ellen's father) and Michael Xavier (Ellen's shallow boyfriend).

The comedy isn't ever hilarious, but it's more gently amusing than some other examples I could name, and the plot hinges on a conceit that never feels entirely believable, but when has that ever been an issue when it comes to Christmas movies? If I can put up with films that have Santa, elves, annd magic sprinkled throughout them then I can put up with a little stretching of plausibility.

I realise that a lot of these reviews will feel like I am just saying the same thing over and over again. That's the downside of watching so many Christmas movies. They operate on familiarity and predictability. They often work with the exact same set of tropes (even if they try to disguise things with the framing narrative). So if you ever get fed up of reading similar sentences in my December reviews . . . imagine having to sit through all of the actual films. 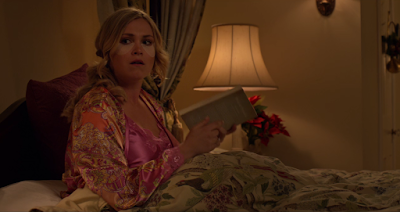