Where to begin, where to begin? When this animated film started I thought that I was going to hate it. It was a bit too cutesy, it wasn't the best animation, and I struggle to identify with the plight of a young girl who just wants a puppy for Christmas. And I was just waiting for the moment that would allow Mariah Carey to belt out her song.

Oh, didn't you know that this was tied in with Mariah Carey? Oh yes. There's apparently a book that this is based on (although the film is written by Temple Mathews, who has managed to turn the short story into a standard feature-length film), and Mariah provides voiceover narration, as well as MAYBE a rendition of her seasonal hit.

But I digress. Let me get back to hating this film. Except I stopped hating it, and I stopped hating it quite early on. There was still a part of me that resented the idea of a film being spun out from a small book (that I was previously unaware of) that was spun out from a hit Christmas song, and the animation wasn't exactly superb, but I started to enjoy this simple tale, and I had to concede that if I was a much younger viewer then I would probably love this.

Young Mariah (voiced by Breanna Yde) wants a puppy, as I have already mentioned. Unfortunately, her father is very allergic to dogs. That doesn't stop young Mariah having her heart set on picking up a dog named Princess, a dog that she thinks is meant to be hers. As a temporary remedy for her possible heartache, Mariah is given a puppy, Jack, who turns out to be quite a handful. He always seems to do the wrong thing at the wrong time, driving Mariah further and further up the wall with his puppy antics.

Directed by Guy Vasilovich, All I Want For Christmas Is You is a star vehicle that allows you to forget about that same star as you are drawn into the delightful story that unfolds. There are some other supporting characters, with the only other standout being a mischievous grandpa (voiced by Henry Winker), but this is all about a little girl and her puppy. Yes, you know the song is coming, and you know that it won't be the only song in the film, but that starts to matter less and less as the film actually, and surprisingly, earns a decent amount of goodwill from viewers.

You're unlikely to enjoy this much if you hate Mariah Carey (I have always quite liked her) as she provides enough narration to infuriate anyone familiar enough with her voice, and I am not going to pretend that this was designed to appeal to anyone other than children, or anyone having to watch the whole thing while sitting beside children, but this won me over. Which means that I even listened to the whole song over the end credits. And it's a great Christmas tune, one that I end up dancing and singing along to almost every time I hear it.

All I Want For Christmas Is You can be purchased here in the UK.
American Mariah fans can buy it here. 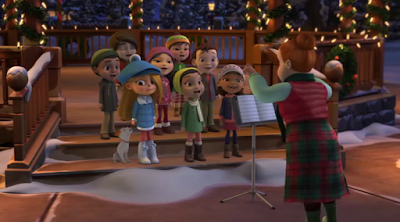