A delightful animated anthology from The House Of Mouse, Mickey's Once Upon A Christmas uses some of your favourite characters to provide younger viewers with a nice selection of stories that ultimately highlight the true meaning of Christmas.

The first tale has Huey, Louie, and Dewey wishing that Christmas could be every day, much like the hit seasonal song. But, when that actually happens, it doesn't take them long to tire of the idea. As they keep themselves occupied with toys, food, avoiding affectionate relatives, and some pranks, they start to realise that there's possibly something more to Christmas that they hadn't considered while being a bit selfish and materialistic. The second tale focuses on Goofy and his son, with both taking turns at playing Santa Claus at one point, trying to provide others with Christmas cheer. Third, and last, we have Mickey Mouse and Minnie struggling to get each other the perfect gift.

Disney are, of course, no stranger to the animated anthology. It helped them piece together features many years ago, before they didn't have to worry about money and production costs (I know there are still people who monitor such things, but it can't be as worrisome now that Disney owns half the entertainment world). No matter what you think of the brand, they are very good at what they do, mixing entertaining antics with a healthy serving of good morals. The animation is nice enough, but this is really all about the characters being placed in these Christmas tales, so anyone who likes anthropomorphic ducks, Goofy, and Mickey and co. should be kept easily entertained.

The framing device, as slight as it is, shows three main toys under a tree (a boat, a teddy bear, and a sleigh) and has some narration from Kelsey Grammer. There's not a moment of this that doesn't feel as if it's doing the best job possible to make you hear bells ringing and smell the animated pine needles.

Followed by Mickey's Twice Upon A Christmas, which I have yet to see, this could easily make itself a small viewing tradition in any family household. And, at just over an hour in length, it's one that can easily be slotted in between other activities of the season. I'd even suggest that it's possible for children to enjoy this one without them getting themselves too hyped up just before bedtime (especially handy for those needing a temporary distraction as they prepare gifts at the last minute while playing Santa Claus).

Here's a boxset for UK people to pick up and enjoy.
And here is that same set available for dollars. 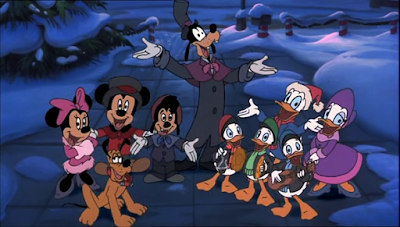