An unlikely start to a franchise, and yet here is a dog-centred Christmas film that currently has numerous sequels. Don't take that as a sign of quality, however. It's really just a sign of how easily these kinds of films can be churned out.

Mario Lopez provides the voice of Zeus, a dog who wants to do well for his new owners (Gary Valentine, Elisa Donovan, and their kids, played by Sierra McCormick and Charlie Stewart). Unfortunately, he doesn't seem to be able to move around the house without putting a paw wrong. But maybe he can get himself into good enough guard dog shape in time to foil a couple of would-be robbers (Dean Cain and Joey Diaz).

With a smattering of decent enough names, including Mindy Sterling and Adrienne Barbeau in small supporting roles, and enough scenes showing a lovely dog looking lovely, The Dog Who Saved Christmas is fairly easy holiday viewing. There are also a couple of talking rodents that will remind viewers of Babe (a much better film for those seeking some talking animals).

Written by Michael Ciminera and Richard Gnolfo (with the two of them helped in the story department by Jeffrey Schenck), this is a simple tale of being able to find your inner strength when it is most needed. The backstory for Zeus tries to be worthwhile, although it doesn't end up being nearly as effective as it should be, and the third act is when you are rewarded with one or two satisfying moments. Sort of.

Director Michael Feifer looks to have made a real career for himself in the world of TV movies, and I can only hope that he has used each project to try honing his craft a little bit more. Judging him solely on this film, he does very little to elevate the material, and nothing to help distract from the cheapness of it all.

Despite its many flaws, mainly the lack of care in the script department and the lack of care from Feifer, this has enough to keep undemanding viewers mildly entertained for the runtime. And when I say that I actually mean that I am happy enough to watch any film with a cute doggie as the main character (whether or not he or she is being voiced by one of the Saved By The Bell cast).

Some of these here films are here.
Americanas can pick up a triple-pack here. 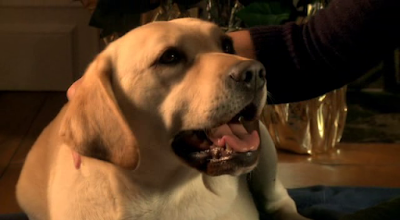