Olive, The Other Reindeer is an odd, sweet slice of animation that, thanks to the quirky humour and strange style of the whole thing, perfectly hits all of the expected Christmas story beats without feeling like a carbon copy of so many other tales just like it.

Drew Barrymore voices Olive, a dog that doesn't always act as a dog should. Olive also loves Christmas, so she decides to head on a long journey to help out Santa. A reindeer is injured, which means no sleigh availability, which means the possibility of NO Christmas. And that just won't do. Along the way, Olive befriends a hustling penguin (Martini, voiced by Joe Pantoliano) and has to avoid the clutches of a very grumpy mailman (voiced by Dan Castellaneta).

Directed by Steve Moore, and "presented" by Matt Groening, it's quite obvious from the opening scenes that this is something that will appeal to those who enjoy The Simpsons. The crude animation makes up in heart what it seems to lack in grace and precision, the dialogue is a lot of fun, and the pacing is perfect (with a runtime of approximately 45 minutes, it doesn't feel too short but also doesn't outstay its welcome). The script, written by Steve Young, based on the book by J. Otto Seibold and Vivian Walsh, is simple in the plotting but full of delightful lines peppered throughout every scene.

The voice cast also helps a lot. Barrymore has just the right, upbeat, voice for the main character. If anyone can play a likable, hustling penguin then that someone is Pantoliano, and Castellaneta can do general grumpiness in his sleep. As well as those featured players, viewers are also treated to the vocal stylings of Edward Asner, Peter MacNicol, Tim Meadows, Jay Mohr, and even a great little musical moment involving Michael Stipe.

Overall, this is a great short film to incorporate into any annual viewing selection. While not as established as many other classics, and not as polished or covered in bells and whistles as some modern features (yes, you know I am looking at you and your 3D motion capture shenanigans, Robert Zemeckis), this makes up for any shortcomings with humour and heart. And it's mostly the heart that makes it such a lovely seasonal gem.

UK folks can pick up the DVD here.
Americanos can pick it up here. 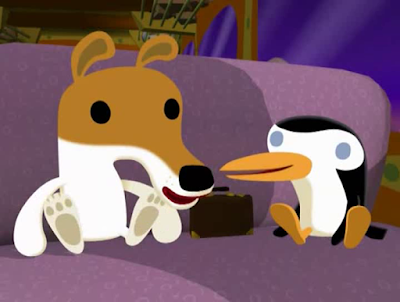