The Miz. Do you know him? If you're a wrestling fan then the chances are that you do. Or if you have watched any of the many WWE movie products released over the past 5-10 years. The Miz is one of their stars that they have decided to give a helping hand with by building him a movie career. Good for The Miz, but is it good for viewers? Well, he's not that bad onscreen. He has a bit of personality, an ability to engage in moments that show he has a sense of humour (particularly in Santa's Little Helper), and the obvious physicality for the action roles (which I am assuming is on display in his starring role in The Marine movie series).

But Christmas Bounty, while featuring The Miz in a large supporting role, isn't really about him. It's about a character played by Francia Raisa. She plays a schoolteacher who is trying to escape her bounty hunter past. She's so ashamed of her roots that she hasn't explained any of it to her fiance, James (Will Greenberg). Which causes some confusion when she ends up returning home to tie up some loose ends. James follows her, he meets her mother (April Telek) and father (Michael Hanus), and he starts to realise that she may not be who she says she is. While viewers simply keep thinking about how she isn't The Miz.

Director Gil Junger (who many years ago gave us the wonderful 10 Things I Hate About You) takes this silly premise, a silly premise crafted by no less than three writers (Andrew Black, Claudia Grazioso, and Vivian Lee), and does the minimum required to keep it all moving along briskly enough from start to finish.

Junger is helped out a lot by the cast. Raisa is fine, The Miz is just about charismatic enough to warrant his move up the movie career ladder, and Greenberg just has to look suitably bemused and out of place. There's also a small supporting role for Chelan Simmons, and Alexs Paunovic playing a heavy with a vendetta, and Telek and Hanus are a lot of fun as the parents proud of a daughter who now feels a bit embarrassed by her background.

The script isn't as funny as it should be, and the action is lacking, which is a shame. This is a film that could easily be improved by a) some more action beats, and b) a better blend of laughs with the fights, as characters struggled to resolve their different issues and avoid receiving extra bruises.

If you collect films starring WWE alumni then this is one to make a very low priority. If you are after something seasonal to enjoy during the holidays then, again, this should be a very low priority. Despite the timing of the events, it doesn't ever really feel too Christmassy, and you don't get much ho ho ho for your money.

American readers are lucky enough to be able to buy this here. 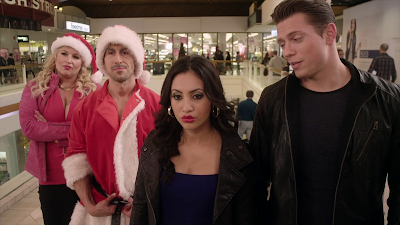