The office Christmas party, eh. It's an annual tradition for many. The one night of the year when everyone drinks too much, some embarrassing truths are voiced, folk photocopy various body parts, the dancing varies from the sublime to the ridiculous, and occasionally someone goes up to the big boss and says or does something so insane that they are never seen in the workplace again.

With all that in mind, it's surprising that we haven't had a big Christmas comedy based around that tradition before now. Am I forgetting any other candidates? If so, I am happy to stand corrected (and can only blame my failing memory). What isn't surprising is that this particular film tries to take the premise and use it as the structure upon which to hang a bawdy comedy along the lines of The Night Before, Horrible Bosses, and We're The Millers. I mention the first because it's Christmassy, obviously, but the other two are perhaps more appropriate, mainly because of how they use Jennifer Aniston and benefit from a selection of great supporting players.

Jason Bateman stars as Josh Parker, a man who is working for a tech firm that might not survive beyond Christmas. The boss (T. J. Miller) has been ordered by his sister (Jennifer Aniston) to avoid throwing any kind of party, and to not give anyone a Christmas bonus. Which means, of course, that he instead decides to try winning over a potential new client by throwing the biggest, wildest Christmas party ever and letting people win their cash bonuses inside a money tornado machine. This is a nightmare for the uptight head of HR (Kate McKinnon), and soon leads to a potential nightmare for everyone else, when they realise that their jobs are on the line and their boss may not have taken the best approach to guaranteeing that the business remains solvent.

Josh Gordon and Will Speck directed this, both also responsible for the highly enjoyable Blades Of Glory, and the script was written by Dan Mazer, Justin Malen, and Laura Solon. Two directors and three writers. But those three writers were developing a script from a story that was created by THREE OTHER WRITERS, apparently. How hard is it to throw together some big laughs for a comedy that is set during an office Christmas party? Very hard, it would seem, because there aren't many big laughs here.

The film isn't actually bad, and I had lots of little chuckles all the way through, but there aren't really any moments that stand out. No one memorable scene that you can talk about with friends as a shared favourite moment. And that's a great shame, considering the people involved. Hell, there's even a fleeting dance off between two characters that should have been a highlight, but is instead too short and safe to prompt anything more than a wry smile.

Bateman does his usual thing here, and has it locked down as usual. Miller is someone I like, but I could absolutely see him as being the grating type, so be warned. Olivia Munn also plays one of the main characters, but she's really not onscreen for anything more than plot progression and to motivate the growth that we expect to see in Bateman's character, who spends a lot of time being told how he always plays things too safe. Aniston is also ill-served by the script, although that comes from her being the nominal villain of the piece and having to play things that way as one-note as possible until the writers change things too late for anyone to really care. McKinnon is very funny, but I am pretty sure she can spin gold out of the most threadbare material at this point, and Courtney B. Vance, Rob Corddry, Vanessa Bayer, Randall Park, and Karan Soni are among the other wasted talents. Jillian Bell is a definite highlight, and the writers do well to bring her character in at just the right times.

It will do if you want a few laughs from something that isn't also drowning in sugary sweetness, but Office Christmas Party is certainly not bound to become a festive tradition. I doubt it will be remembered in a few years time, and that's no bad thing. 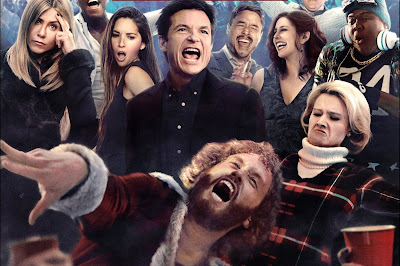