Jennifer Finnigan is Susan Collins, a decidedly unfestive person who tends to view the holiday celebrations around her as an inconvenience rather than anything delightful. Given the chance to write a main story for her newspaper, Susan struggles to think of something that will satisfy readers and provide some of that essential Christmas spirit. When she is told some of the backstory of a family heirloom, the titular angel, she senses that she has the start of her piece. The angel has a history of bringing together loved ones, or at least leading people to where they need to be. And then, while trying to find her holly jolly happy spirit, Susan keeps bumping into a handsome, non-cynical artist named Brady (Jonathan Scarfe). Perhaps the angel has more work to do yet.

Directed by Ron Oliver (who also gave us the much more disappointing A Christmas Detour) , Angel Of Christmas is almost a perfectly fine bit of seasonal fluff. Finnigan is adequate in the lead role, Scarfe is just about cheery enough without being too annoying, and the two of them together have a good mix of initial incompatibility while still maintaining a chemistry/attraction. Everyone onscreen hits their marks as they run through some predictable story beats, the soundtrack is full of that blandly festive library of songs and tunes that channels like Hallmark and ABC must have stockpiled in a big basement somewhere, and the "accidents" that occur when the angel is scheming are played out at just the right level of cute magic. It may not be the most exciting thing you will watch this year but Christmas TV movies seldom are.

As well as our two leads, Tahmoh Penikett plays Derek, a man looking to put some sweet moves on Susan, Barclay Hope and Wanda Cannon play Susan's parents, and Mark Bendavid and Chloe McClay are two main characters shown in flashback to provide the origin of the tale of angelic magic. The performances vary, but everyone does better than the wooden angel, although some only just.

Where it all falls down is in the third act, which just stretches things a bit too far (yes, even for this kind of film). Writer Gary Goldstein may have been pleased with himself as he created extra coincidences and connections but it ends up turning the finale into something laughably akin to the worst soap opera plotting I have experienced (and I used to be, kind of, forced to watch Sunset Beach, for my sins). It's so bad, in fact, that I found myself rolling my eyes and saying "no, don't do it, oh please no" repeatedly during one main sequence, despite nobody else being around to hear my protests. 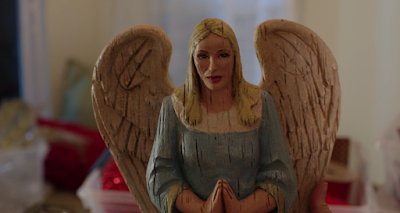