After James Wan and Leigh Wannell found fame with Saw, for better or worse, they quickly moved into the territory that would become their more familiar ground over the next decade, the supernatural horror. Dead Silence is a film that is interesting now to watch for a number of reasons, not the least of them being the seeds of ideas that both men would use more effectively in a number of their more successful movies.

Things start with a dummy being delivered to the abode of Jamie And Lisa Ashen. It's not long until Lisa is dead, Jamie is the prime suspect, and a trip home sees him start to uncover a number of clues that point to the evil influence of a famous ventriloquist named Mary Shaw. He is trying to prove his innocence and find out exactly what happened, all the while being closely watched by a detective who clearly believes that it's only a matter of time until Jamie slips up and can be charged with murder.

There's so much here that I enjoy that I find it easy to overlook the things that Dead Silence does poorly. What it lacks in ANY sense of reality, what it fails to do in terms of hiding the minor and major twists, it more than makes up for with huge helpings of creepy atmosphere and a premise that allows plenty of chills to be wrung from that creepy standby, the ventriloquist's dummy. But this is a film that begins with a couple receiving a delivery of one such dummy and not immediately setting it on fire, setting their whole house on fire, and moving to the furthest possible zip code at the other end of the country. And that's not the least believable thing about the film. The production design is wonderful throughout, but turns a small town into nothing more than a succession of sets that wouldn't look out of place in any major Halloween haunt (it's no surprise to find that the film was used at Universal's "Halloween Horror Nights" in the year it was released), none of the characters feel remotely close to being normal human beings, and the finale, as enjoyably scary and effective as it is, is quite preposterous. It also suffers from the kind of editing that many disliked in Saw.

Wan directs competently enough, although he's at the beginning of a steep learning curve that he would easily stand astride within a few years, and he does enough with the pacing and atmosphere to help distract from the silliness. Wannell, on the other hand, can't seem to make headway with the script. He's gone on record with his unhappiness at the experience, and final product, but I'm surprised that he couldn't work his way out from the strong core and create something much better than what we ended up with. Both the exposition and dialogue are weak, although he deserves credit for creating the better scares that help to make things a bit easier for Wan.

Perhaps some stronger leads would have helped. I like Kwanten (although this was a while before I saw his work in True Blood and Red Hill, both allowing him to do much better work) but he's unable to do much with the material here. Donnie Wahlberg is so bad, at times, that he feels as if he's wandered in from an audition for the role of "obsessive and obstinate cop" in some parody. Judith Roberts is wonderfully creepy in the role of Mary Shaw, Bob Gunton and Amber Valletta do well as, respectively, the father and mother-in-law of Kwanten's character, and Laura Regan isn't onscreen for long enough to make a strong impression.

A dangerous dummy, a scary-looking old woman, an entity with a vendetta against individuals that isn't easy to placate and/or get rid of, a cop who may find himself in trouble while trying to keep track of a main suspect, Dead Silence may be viewed as a failure by some but it's an essential stepping stone in the filmographies of both Wan and Wannell. And it's actually a decent little chiller too, if also a bit of a silly one. 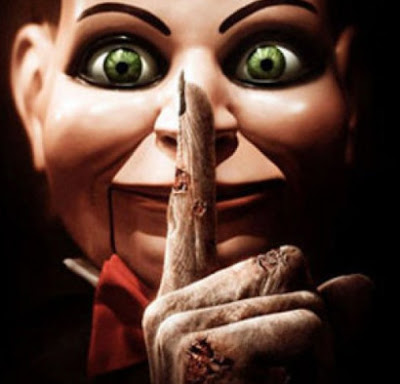