As soon as Can't Take It Back started, I started to get a good feeling about it. It was a supernatural horror about a vengeful spirit that made use of social media. Considering that I was entertained enough by Unfriended, and had enjoyed Friend Request even more, I thought this would be a bit of simple entertainment for me. Sadly, things soon started to dip, and it never recovers for the rest of the runtime.

Ana Coto plays Kristen Shaw, a young girl who ends up joining her friend (Morgan, played by Ivanna Sakhno) in posting hateful comments on the photo of someone's Facebook profile. Morgan is familiar with the target, Kristen is not. And that's what sets off a chain of events that will lead to moments of madness, death, and plentiful jump scares in rooms with unreliable lighting fixtures.

Directed by Tim Schechmeister, who also co-wrote the screenplay with Matt Schechmeister, Can't Take It Back doesn't take long at all to devolve into a shapeless lump of clichés and moments that we've either seen in much better movies or we didn't need. It's clear that Schechmeister & Schechmeister had more ideas about the scares and set-pieces they wanted in the movie than they did about giving you characters to care about or a plot that makes any sense.

Arguably the biggest problem that the film has is the way in which most of the teen characters just accept some very odd occurrences, and surely had an idea that something was off from the very beginning, but don't give it any more thought until the pain and death begins. That's one reason that you don't end up caring for anyone onscreen, and the other is the lacklustre backstory given to the proceedings. It's good to have a film that utilises cyber-bullying as a central plot point but this one doesn't do it well. It turns one minor mistake into something life-ruining for everyone involved. I KNOW that anyone who has gone through a similar experience may feel the same way but at this point I am waiting on a more positive spin on the situation, a character who sends an embarrassing/naked photo/message and then shrugs when enemies try to use it as a weapon. Perhaps that way we can one day make social media a slightly safer space, meaning we will then only have to be on the lookout for ghosts in the machine, sexual predators, catfishing individuals, movie and TV spoilers, unexpected clips of Jimmy Fallon, and links to endless streams of pop-up boxes that want you to accept cookies, take the cookies, have ALL the cookies.

I wouldn't say that the cast are bad. They're just not very good, and seem worse when stuck in this material. Coto is fine in the lead role, and most viewers will probably want to see her figure out a solution to her big problem, but Noah Centineo, Ivanna Sakhno, Logan Paul, and all of the others just blend into one large blob of disposable teens.

The first third has some good stuff (including the first time that Coto has her mind messed up by an online encounter that understandably scares the crap out of her) but it's all downhill after that, as we move from one disappointing scene that looks as if it was rejected by Silent Hill to another, complete with pacing issues that make the 90-minute experience feel over two hours long. Not one to prioritise ahead of other choices.

Buy this instead.
Or a cheap laptop, if you're in America. 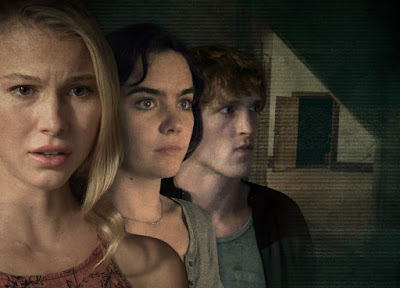