Written by Alan McDonald and the late Ryan McHenry (expanding upon his 2011 short, Zombie Musical), Anna And The Apocalypse is a fun time for people who can accept that it mixes some gore gags with teen drama, a bit of comedy, some musical numbers, and a wee bit of added Scottishness. It's a good film, almost a great one (and many have already showered it with love as they watch and rewatch it while singing along with the songs), and one I was happy to finally see a little while ago, and then buy on DVD. Some of the goodwill towards it MAY have been built up by some of that special film festival atmosphere and the attitudes of those involved (having heard director John McPhail in conversation a few times now, I find the guy hilarious and wonderful) but I don't think that should take away from the fact that the film still had to be good enough to win people round when it started to "do the rounds".

Anna Shepherd (Ella Hunt) is the Anna of the title, which means she's going to be right there in the middle of a horrible zombie epidemic. At Christmas. It breaks out around her before she realises what is happening, leading to her initially seeking shelter in her workplace, the local bowling alley. But she won't be alone. Alongside her will be her best friend, John (Malcolm Cumming), and an assorted mixed bag of characters including Steph (Sarah Swire), Chris (Christopher Leveaux), and eventually Nick (Ben Wiggins). All of them have different ways of dealing with the situation and different motivations. Some just want to survive, some seem to have fun killing zombies, and some still hope to be reunited with loved ones. Mark Benton is Anna's father, who ends up stuck in her school with a horrible headmaster (played by Paul Kaye) and other survivors, including Lisa (Chris's partner, played by Marli Siu).

Considering the relatively small budget that this must have had, Anna And The Apocalypse is a film that looks and feels very nicely put together. The quality of the sound and camerawork is excellent throughout, if sometimes a bit rough around the edges when it comes to some of the FX work and the cheats used to imply a bigger picture just offscreen, and the only major gripe I have with is the lack of choreography that feels creative enough in many of the musical numbers. Even then, I understand the time and money needed to work on these things so it's not something I find unforgivable. Don't expect this to be The Greatest Showman with zombies and you should be okay.

For most of my movie reviews I tend to work through the various performances from the main cast members to highlight any great, or very poor, work. I'm not going to do that here. It feels as if it would be unfair. Not everyone is on quite the same level, that's all I will say, but most at least get a moment in which they shine, or have a way of working with the others that shows why they were picked for their role. Okay, I'll say that Hunt is great in the lead role, and that Cumming is so likeable that it's almost sickening, dammit, but you'll just have to see how you feel about everyone else when you watch the movie.

I'm also not going to grade every song on the soundtrack. I wish a few of them were a bit catchier but, as I have said before, an original musical is bloody hard to get right. The fact that this film includes such varied joys as "Hollywood Ending" (the standout, I think most people would agree), "Turning My Life Around", "Soldier At War", "It's That Time Of Year" and "The Fish Wrap" (the latter two both make me laugh hard) proves that it's got enough to have you tapping your toes and singing along, once you learn the words.

The script may not be as jam-packed or hilarious as it could be, especially if you don't have the penchant for cheesy gags that I do, but it admirably weaves together everything that it makes time for, scatters plenty of references throughout (probably deliberately, but one or two may be coincidental), and unabashedly aims for some emotional punches that most other movies in this bracket wouldn't even attempt. It also makes great use of Christmas elements without making every single scene bright red and green and overstuffed with Santas and elves.

Will you love this? Maybe, maybe not. I hope you will at least enjoy it, especially if you're a British viewer after something home-grown. It's a film that you have to meet halfway, that's the way I see it. The opening scenes may put some off but once it gets going then you're in for a good time, and then you start to grow attached to the characters, the humour starts to work, and it ends up being a little gem that everyone involved can feel rightly proud of.

You can buy the movie here from Second Sight films..
Americans can get the film here.
And the official site is here (go on, stop in there and shop direct). 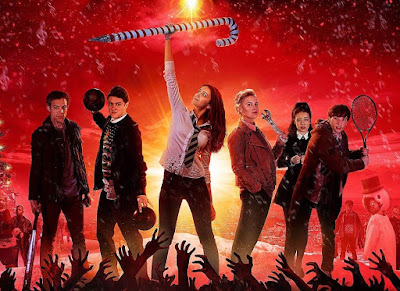