Okay, there are two ways to look at Polterheist, a film I decided to give my time to purely on the basis of that great title. On the one hand, it's not great. Let me get that out of the way just now. It has a number of flaws that I will discuss in more detail soon enough. But on the other hand, it's actually a pretty solid, you might even say impressive, mix of comedy, crime, and the supernatural.

Developed from a short film of the same name, the plot focuses on two gangsters named Tariq and Boxy. They are tasked with discovering the whereabouts of a stash of drug money stolen by their old boss, Frank. The big problem is, and it's something they want to keep a secret, they just killed Frank. Which means they have no chance of recovering the money and keeping themselves safe, unless they are able to make use of the particular skillset of a local woman, Alice, who claims to be able to communicate with the dead.

Directed by David Gilbank, his feature debut, Polterheist impresses most with the way that it seems to be constantly punching above its weight. It's clear that this is not a film with a large budget, yet nobody uses that as an excuse to cut corners and churn out something too lazy and shoddy (unlike a hundred other low-budget features I could glare at). Gilbank does make a couple of standard mistakes, especially when it comes to the inconsistency of the visuals and the self-indulgence of a few moments, but he carries viewers over those quickly enough, thanks to his energy and confidence.

The script, co-written by David Gilbank, the late Gemma Head (who also has a small role onscreen), and Paul Renhard, is a bit too uneven throughout, with many scenes either feeling unnecessary or padded out to bulk up the runtime, but there's no denying that it deserves praise for what it gets right. I don't think I would recommend this to anyone seeking a pure horror, nor to anyone seeking a pure comedy, and maybe not even to anyone after another British gangster film, but I would recommend it to anyone after something a bit different, something that doesn't quite make the most of all the subgenres it moves through but tries admirably to weave them all together into one unique movie experience.

Sid Akbar Ali and Jamie Cymbal play the two main characters, and both do a decent job, but many scenes end up being stolen by Jo Mousley (who plays Alice) as she transforms from timid hostage to the kind of harsh and manipulative character that Frank obviously was, complete with a very different tone of voice too. The other scene-stealer is Pushpinder Chani, playing Uday, the criminal who wants his money back. Chani is a force of nature for almost every moment that he's onscreen, he is introduced playing indoor cricket with some hapless humans in place of wickets, and his amusingly outrageous performance is responsible for some of the best laughs in the film. The aforementioned Head does well in her role, and Polly Lister is perfectly fine as the typical cop trying to sort out a situation that looks about to go from bad to very, very messy.

I've tried to stay balanced and reasonable here, because I think it's important to praise enjoyable independent films when they can benefit from positive word of mouth and support, but it's equally important to refrain from the kind of hyperbole that just leads to people becoming disappointed in reviewers and then perhaps dismissing other movies they try to recommend. Polterheist worked for me, overall, but I can easily see many people still dismissing it (not THAT scary, not THAT funny, not had enough money put into it). I'm not going to hail it as a modern classic, I'm not even going to say that everyone must see it. I would just encourage those who don't mind low-budget movies to give it a go, and I'll be keen to see what Gilbank and co. get up to next. May I suggest any one of the following titles: Omen's Eleven, Snitches Get Witches, or even Poletergeist (yes, the spelling is deliberate, it's a sequel to this movie in which an angry spirit gets revenge on some gangsters who wronged him by scaring away the patrons of their strip clubs). 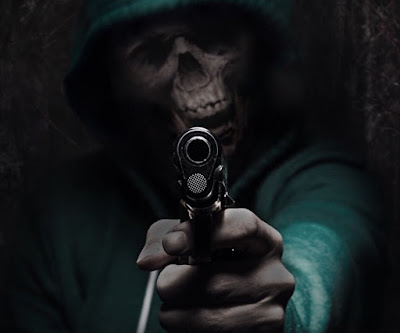