I think most people are already aware of my heathen ways but, for those who aren't, I am a committed atheist. And I'm starting this review with that reminder because I think people often confuse my lack of belief, and my ability to use anything and everything in joke form, with a disrespect in the beliefs of others. That's not the case, not at all. Everyone has the right to peacefully believe in whatever god they want to connect to, be it the Catholic god, Shiva, Buddha, the wonder of the cosmos, or whatever else you seek. I become disrespectful when those beliefs are used to harm others, used as weaponised rod rather than a firm support structure. If you talk to people who are earnestly following a belief system that they hope to do right by then you'll often find ways to engage and agree on things from differing viewpoints.

There's a wonderful scene, a favourite of mine, in the film Millions (perhaps the most underseen Danny Boyle film in his filmography) in which a character explains to a young boy a different version of the events of "the sermon on the mount". The young boy then seems unhappy that the explanation makes the feeding of the crowd seem like less of a miracle. The other character explains that the explanation doesn't make it less miraculous, it just shows how the miracle can come about in a very different way. I love that idea, and can believe in it. Which means I can agree with anyone who believes in that event, despite viewing it from a different perspective.

The Last Temptation Of Christ is not a film that wants to make Christ any less important as a figure, despite the fact that it has many scenes that show him battling with very human thoughts and conflict. It's a film that wants to make Christ equally important BECAUSE it is hypothesised that he did his good deeds while also having doubts and the potential to make mistakes. It arguably makes a more powerful argument for the inherent goodness and bravery of anyone who went through what Christ is said to have endured.

Directed by Martin Scorsese and written by Paul Schrader, from the book by Nikos Kazantzakis, there's no question that the talent behind the camera here is both formidable and also well-suited to something looking to further explore Catholicism, temptation, and guilt. You could argue that both Scorsese and Schrader had been finding ways to tell this tale for the past decade, culminating in this, their most overt and explicit study of these themes. The fact that this doesn't quite match their previous collaborations, struggling to hold up under the sheer weight of the powerful tale they want to tell, doesn't mean this is any less worthy of your time. It's a hefty investment, over two and a half hours, but one you won't regret (if you're at all interested in the subject material and the artistry with which it can be tackled).

Willem Dafoe gives a performance that sits up there with his very best, possibly knowing that anything less when playing Jesus Christ would be a missed opportunity. Barbara Hershey is also very good, playing Mary Magdalene. Harvey Keitel feels a bit out of place, as Judas, but the fact that his belief and devotion is so strong makes the narrative even more interesting for those who think they know this tale back to front.

It's funny that I always remembered this film because of the controversy from when it was released. Yet I also put it off for too long because I assumed it would be a dull affair, too dry and preachy. It's neither controversial (although I can see why it upset some) nor is it dull. In fact, I'd say that it's impressively high up there in the general rankings of Scorsese movies, hindered only by a weak soundtrack (from Peter Gabriel) and some of the casting (as well as Keitel feeling out of place, David Bowie brings you out of the film in his small amount of screentime playing Pontius Pilate). Believe it.

You can get the film here.
Americans can get it here. 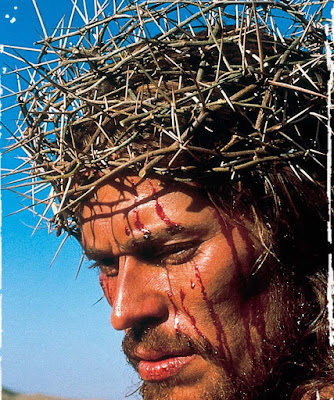