Netflix And Chill: The Breaker Upperers (2018)

Madeleine Sami and Jackie van Beek are a talented duo. Not only do they star in The Breaker Upperers but they also co-wrote and co-directed the movie, and if you've enjoyed any other comedies from New Zealand over the years then I can't see you managing to resist the charms of this. It has that same warmth to it, the savvy use of gentle humour to support material that has some serious points scattered in between the frequent laughs.

The two leads star as Mel (Sami) and Jen (Van Beek), women who provide a unique service for people. They arrange break-ups. Whether it is helping to portray someone as a blatant cheat, delivering the message in song, or even pretending to be the police as they inform others that someone has gone missing, they aim to make the break serious and permanent. And they think they're doing a good job, convinced that those who have been given the bad news will come out the other side all the better for it. It's only a matter of time, however, until the reality of what they do starts to worry one of them, Mel, and this coincides with her becoming unwisely involved with a client (Jordan, played by James Rolleston).

Having heard good things about this for a few weeks now, The Breaker Upperers is one I was keen to get to, but scheduling kept meaning I had to delay it for other things. I implore others not to make the same mistake. It's not flawless, by any means, but it's much better than the majority of other comedies that you may have gone to see at the cinema over the last few years. At least just watch the start of it. The opening scenes quickly set up the characters, and the general vibe of the film, so if you don't like any of that then you're not going to like the rest. But you should like it. All of it.

Although the script lacks any major surprises, even if you can't see the details of the ending coming from the very beginning you can work out most of the general outcomes, the performances do plenty to make up for any sense of over-familiarity. Sami and Van Beek are fun leads, working off one another in a way that feels very natural and believable, and they have surrounded themselves with a talented supporting cast. Rolleston is hilariously dumb for almost every moment that he's onscreen, Ana Scotney is hugely entertaining as the tough young lady that Rolleston wants to break away from, and Celia Pacquola does great work as the woman who finally has our leads facing up to the consequences of what they do. Other fun turns come from Rima Te Wiata, Cohen Holloway, Jemaine Clement (in a brief cameo), and Angella Dravid gets a chance to shine at the very end of the movie.

Although it seems nice and light, and easy to enjoy, The Breaker Upperers is even more impressive because of how wrong it could have gone. The tone works throughout, with some of the more pointed moments still working dark humour throughout the interactions, and you get a fine clash of optimism and cynicism, as well as a belter of a Celine Dion moment on the soundtrack and a lively bit of singing and dancing to help wrap everything up during the grand finale.

Here's a disc that should work fine in the UK.
This SAYS it is an all-region DVD. 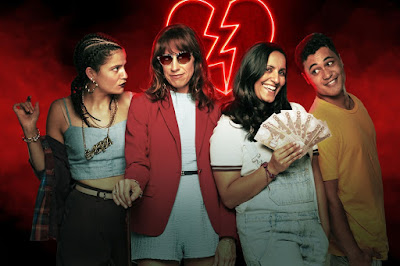