The reason high-concept films are releases is because they're an easy sell. Take Sister Act, for example. It's a fun comedy, a lot of fun, but you can sell it with the simple line "Whoopi Goldberg has to act like a nun." There you have it. Do you like that idea? Does it amuse you? If so, you're bound to get some enjoyment from this movie.

Goldberg plays a singer named Deloris who walks in on her married gangster boyfriend (Harvey Keitel) having someone shot. Running away, she eventually goes to the cops and is asked to testify. That could take a couple of months though, which is why she has to be hidden away in the meantime, hidden where nobody would ever think of looking for her. A convent. Maggie Smith is the Mother Superior who doesn't think this is a good idea, Kathy Najimy is a very cheery and friendly nun, and Wendy Makkena is a bit shy. After some difficulty adjusting, Deloris manages to convince the Mother Superior to let her work with the choir, and that's when she starts realising the good she can do, arranging some non-traditional hymns and helping everyone to do better.

Director Emile Ardilino had a good run of hits from the late '80s to early '90s (starting with Dirty Dancing and ending with this one) and he knows how to put everything together for a perfectly satisfying feature that should please a large demographic. Although this is a star vehicle for Goldberg, the talented supporting cast members all get chances to shine and the major set-pieces are surrounded by lots of great touches and exchanges of dialogue.

Paul Rudnick wrote the script (billed as Joseph Howard) and it's very impressive for a feature debut. Rudnick paces things perfectly, and he seems to know that viewers will forgive the by-the-numbers nature of the thing as long as it keeps entertaining them from start to finish (which it does). You know how it's all going to end, but that doesn't make the journey any less enjoyable.

Goldberg is very funny in the lead role, although slightly toned down compared to her more amusing earlier career turns (the films may not have been as good, or slick, as this one but her ability to be more free and easy with her language and material worked a bit better), and the hilarity steps up a level as soon as she is forced into wearing a habit. Maggie Smith does thin-lipped disapproval better than anyone else I can think of, Najimy is amusing throughout with her wide-eyed view of the outside world, and Makkena does well as the shrinking violet who responds well once given a bit more confidence. Keitel is perfect for his role, trying to be charming one minute and then just ruthless the next, Bill Nunn is good as the cop trying to keep Deloris alive, and Robert Miranda and Richard Portnow are both a lot of fun as the guys who do most of Keitel's dirty work.

The soundtrack helps a lot too, with Deloris adapting a number of the tunes we hear her singing at the start of the movie into various hymns. It will have you tapping your feet and singing along.

Some will rate this even higher, of course, but it just suffers from the air of predictability, especially during the grand finale. The humour is still there, but there isn't the feeling that anything is really at stake. That's not terrible, it's a comforting and safe bit of work, but it does stop it from being a true great. Of course, on any other day I may have just overlooked that and added another point.

The DVD discs are locked but the Blus are region-free here.
Americans can get the same set here. 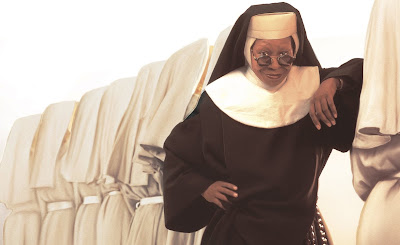