The first feature to be directed by FX whizz Stan Winston, Pumpkinhead is a tale of loss, dark magic, and vengeance (indeed, there was a time when it was packaged as Vengeance The Demon). With a fantastic lead role for Lance Henriksen, this is a bit of a horror gem that is all-too-often forgotten by fans. It did well enough to gain a number of sequels, although I have yet to see any of those at this time (but one day . . . always one day).

The setting is middle-of-nowhere, USA. A group of city types have wheeled into the area, all for the purpose of riding around on their motorbikes and generally having a good time. Lance Henriksen is Ed Harley,  the owner of a small store who ends up seeking vengeance when the visitors accidentally ruin his life. That vengeance comes in the shape of a summoned demon, and it also comes with a lot of pain as the connection between the Harley and the embodiment of his vengeance grows stronger with each kill.

Taking a cue from a poem by Ed Justin, Pumpkinhead obviously benefits from the fact that it is a creature feature directed by someone who should know the best way to show off the practical effects work, and also cover up the weak spots. So it's a pleasant surprise to find that it also has a pretty good screenplay, written by Mark Patrick Carducci and Gary Gerani. The selection of characters means that not everyone is given enough time or attention but when the focus is on Harley and the demon then it manages to emphasise the heart of the tale without ever sacrificing the entertainment factor.

The creature is seen from quite early on, and seen often. Again, this may seem obvious because of the direction from Winston, but it's a bold choice nonetheless, one that ends up working because of the pacing and the interesting turns that the film takes in the third act, as Harley struggles with his decision and tries to undo the events that have been sent in motion. Pumpkinhead doesn't always maintain the same look throughout, and the detailing of the growth and transformation of the creature become quite uncanny during the final scenes.

Although he's rarely a bad performer, Henriksen is on top form here. He casts his shadow over the entire movie, struggling to deal with his loss and rage as he makes one bad decision that fails to provide any satisfying resolution. Florence Schauffler is worth mentioning, playing the local witch woman, named Haggis, and I'll rarely review a film that gives George 'Buck' Flower a role without mentioning him. This is a slightly bigger role for him than usual, playing the head of a clan that includes one child (Bunt, played by Brian Bremer) who gets himself entangled in the proceedings and one child played by Mayim Bialik who gets herself noticed as being the first feature film role for Mayim Bialik. John D'Aquino plays Joel, a real douchebag who causes all of the horror to start, and the rest of the potential victim group includes Jeff East, Kimberly Ross, Joel Hoffman, Cynthia Bain, and Kerry Remsen. Nobody really stands out, for good or bad, which is fine while the vengeance is happening but takes away slightly from the impact of a finale that doesn't involve anyone you really care about (save for Henriksen).

Unjustly consigned to the pile of many forgotten horror movies from the 1980s (along with The Unnameable, from the very same year), Pumpkinhead is easily worth a revisit/first viewing. There are very few moments of down time, the effects hold up very well, and it underlines the thrills and set-pieces with a surprisingly poignant look at the harm you can do (to others and to yourself) when blindly lashing out in a grief-stricken state of mind. 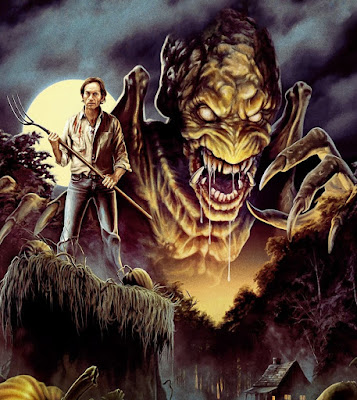 Oh, and here's the full poem by Ed Justin.

"Keep away from Pumpkinhead,
Unless you're tired of living,
His enemies are mostly dead,
He's mean and unforgiving,
Laugh at him and you're undone,
But in some dreadful fashion,
Vengeance, he considers fun,
And plans it with a passion,
Time will not erase or blot,
A plot that he has brewing,
It's when you think that he's forgot,
He'll conjure your undoing,
Bolted doors and windows barred,
Guard dogs prowling in the yard,
Won't protect you in your bed,
Nothing will, from Pumpkinhead!"