Bad Teacher doesn't entirely work, mainly because it doesn't really spend enough time wallowing in the right kind of bad teacher behaviour, but I am surprised that it received the generally negative reaction that it did when first released. While not great, it IS good, and it IS funny.

Cameron Diaz stars as Elizabeth, a lazy teacher who is looking forward to marrying her rich fiancé and leaving working life behind her. Except that doesn't happen. So she's back at school for the next year, looking for ways to earn enough to pay for the boob job that she hopes will help her land another rich guy and allow her to live the comfortable, kept lifestyle that she years for. Her lessons consist of showing pupils films (Stand And Deliver, Lean On Me, Dangerous Minds) and she is happy to do even less than the bare minimum, until she hears about a cash prize for the teacher of the class with the best test results.

Written by Gene Stupnitsky and Lee Eisenberg (who previously worked together on Year One and the American version of The Office), this is most enjoyable when it is showing a character pushing things much further than any adult in a position of authority should. It's just a shame that they don't ever really risk pushing things towards darker, and potentially funnier, territory. This is a film that tries to be fun and edgy without ever being really becoming transgressive, which is understandable from a sales point of view but disappointing nonetheless.

Director Jake Kasdan does solid work, moving between a few of the bigger set-pieces (a car wash moment, a scheme to steal a test paper, the grand finale) briskly enough to ensure that the film doesn't overstay its welcome. It's a simple 90 minutes (give or take) of bawdy humour that does enough by the third act to have you rooting for the main character, despite her selfish and manipulative ways.

Diaz is a lot of fun in the lead role, whether she's trying to look wide-eyed and innocent or showing her true colours in amusing exchanges that leave others shocked. Lucy Punch is the other teacher who suspects that things are going very wrong in the classroom across the hall from her, John Michael Higgins is the Principal, and Phyllis Smith is a rather timid teacher who is also a friend, and unable to see the real badness of Diaz. All of them are great fun, as are Jason Segel and Justin Timberlake, two very different men who work at the school. The former is interested in Diaz while she, in turn, is looking to bag the latter (because his family has money). Thomas Lennon is as hilarious, as he so often is, in a small role, and all of the main child actors do well.

There are a number of mainstream comedies from the past few years that you could pick if you want more laughs, I can't deny that, but Bad Teacher is still good enough to pass some time and keep you amused. It's not ace . . . but it still makes the grade. 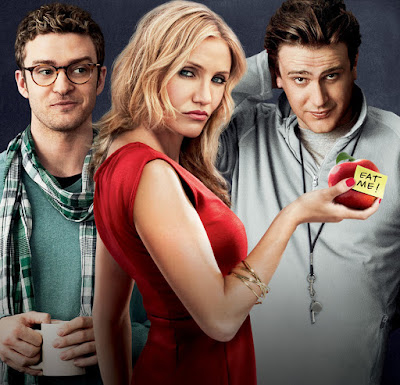