The Man Who Killed Hitler And Then The Bigfoot (2018)

Yes, it's that film with the sensational title that isn't really how you think it is going to be, The Man Who Killed Hitler And Then The Bigfoot is an interesting little gem, largely thanks to the main performance from the wonderful Sam Elliott, but it's hard to think of who it will appeal to. Genre fans will be left disappointed by the lack of certain elements while those who may appreciate the tone and themes of the film more will very likely be put off by the sensational title.

Anyway, despite it seeming redundant, here's the plot. Sam Elliott plays Calvin Barr (as does Aidan Turner, portraying the character when we see his past in a number of flashbacks). Barr is an ex-military man who seems to be doing his best to live a life of peace. Unfortunately, that's not going to be. He's approached by men who know about his past to do something now that he is uniquely qualified for. It's a mission that will stir up a lot of memories, and not many of them are good.

The feature debut from writer-director Robert D. Krzykowski, this is a very strange beast indeed, no pun intended. If you're not sure of how you might feel about any aspect of it, view it as a film that at least serves the noble purpose of giving Sam Elliott a wonderful lead role. If you like Elliott then you should at least find something to enjoy here, thanks to the scenes that make the most of his wonderfully hangdog expression and air of tired resignation.

Everything is well put together, even as it all feels slightly rambling and inconsequential, but it all lifts up when things become clearer in the second half, in terms of both the main thematic strand being explored and the real heart of the central character.

Elliott is cast about as perfectly as could be. You may not believe that he has done, or could do, what the title states, but you can easily believe that he is a man who has thought long and hard during many times in his life. He seems like a man who can take a moment to weigh up the pros and cons of any situation and then, no matter what it costs him personally, can be counted on to do the right thing. This film would be nothing without him, no matter the decent work put in by Turner, Larry Miller (giving a wonderfully understated performance), and Caitlin Fitzgerald (sweet and shining like a light in the storehouse of memories that our lead wanders through). The other person to note is Ron Livingston, although his role is a stereotypical American agent out to persuade someone who doesn't want to do the job that it is in their best interests to do so.

I'd really like to comment more on what this film is actually about but that would spoil the pleasure of discovering it for yourself. Give it a watch, don't expect anything as silly as the title suggests (although it's not really mis-selling itself), and enjoy basking in the wonderful charismatic glow of Sam Elliott for a small part of your day. What more do you need? 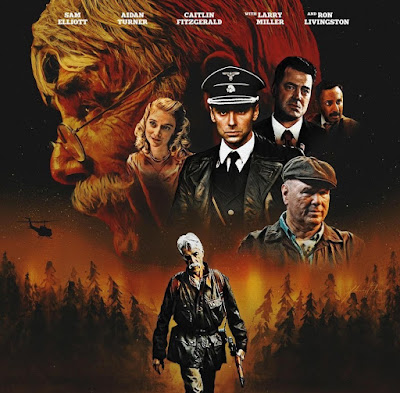