I wonder who thought that now was a good time to bring back the character of Johnny English, a rather arrogant man who often has ideas he lacks the skill to turn into action, who views himself as superior to his global counterparts, despite consistently proving otherwise, and who seems stuck in a haze of past former glories that are formed from chance events, misconceptions, and moments of standing on the shoulders of others. On second thoughts, it makes perfect sense that this character came back now. But is this new movie any good?

The plot sees Johnny English (Atkinson reprising the role, of course) being the last resort, yet again, when a national emergency needs a hero to avert disaster. This time the disaster is caused by a cyber-criminal. English is reunited with Bough (Ben Miller), he has some classic gadgets to help him along, and also gets the chance to become smitten with a woman named Ophelia Bhuletova (Olga Kurylenko).

There are some good laughs to be had here, a couple of set-pieces made me chuckle throughout, but perhaps not enough to warrant an entire new adventure for the UK's most hapless spy (although, in fairness, this balances the character out between the useless man we first met and the more skilled agent of the second movie, albeit rusty after his years not being in active service). I will always laugh at a scene that has Rowan Atkinson dancing to an intense dance tune, but that can be done without a whole Johnny English movie framing it. Likewise, the sequence in which Atkinson dons a VR headset and causes havoc in London is a lot of fun, but also feels as if it could have been reworked within a better narrative.

Because for all it gets right, and director David Kerr (making his theatrical feature debut after a LOT of impressive TV work) certainly keeps everything moving along briskly enough, in line with the light and amusing script by William Davies (who also wrote the first film), there's an inescapable feeling that we've seen it all before, done better, or we're seeing something that could have been part of a much fresher experience. English is a character trotted out again when he should probably have been left in retirement, although that is a lot of what the film uses to get laughs.

As for the performances, everyone joins in with gusto. Atkinson and Miller make a good duo, once again, with the latter particularly entertaining during the many times he chooses not to comment after yet another disastrous episode or lapse in judgement. Kurylenko is the kind of glamorous and dangerous woman she can play in her sleep, Jake Lacy is a tech whizz who may just be the most obvious link to the cyber-terror, and Emma Thompson is a hoot as a Prime Minister who gets through each bad day with sheer force of will and canny decision-making. And alcohol.

Maybe slightly better than the first movie, especially during a wonderful opening sequence that shows English in his new role as a teacher, but not as good as the second, this is a third outing ultimately undone by how completely unnecessary it feels.

You can buy a boxset here.
Americans can buy the movie here. 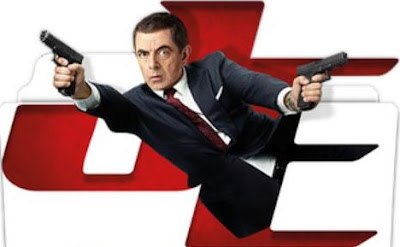