A film that does exactly what the title tells you it is going to do, The Incredible Melting Man is a strange and uneven viewing experience, saved by the moments that feature the titular character, a tragic figure who has many moments that allow him to parallel Frankenstein's monster.

Alex Rebar is that man, an astronaut named Steve West who has been fundamentally transformed during his last space voyage, a trip that killed the men alongside. He escapes from his hospital bed and starts to wander through the countryside, killing people as he continues to melt into a sludgy mess. It's up to Dr. Ted Nelson (Burr DeBenning) to find him before too many people die, but he always seems to be a step or two behind.

Written and directed by William Sachs (who would go on to give us the much more enjoyable Galaxina a few years later), this is an FX showcase that doesn't have enough decent scenes away from the nasty moments, and often doesn't even show off the practical work, headed up by Rick Baker, as well as it could. Originally intended as a campy homage to past sci-fi horror movies (there's definitely a Quatermass vibe there, amongst the other influences), the fact that producers wanted something more straightforward and serious helps to explain the uneven tone of the whole thing, with Sachs still managing to squeeze in some quirky humour here and there, certainly in the first half of the film.

Rebar isn't really seen under all of that make-up but he does well enough as he shambles around, and he arguably puts in a better performance than most of the other main cast members. DeBenning is an unlikely "hero", really only the best hope for Rebar when compared to the local Sheriff (Michael Alldredge) and a grumpy General (Myron Healey). Ann Sweeny is the wife of DeBenning's character, and she does okay in her role, Cheryl Smith at least makes an impression, playing a model stuck in the middle of nowhere with a sleazy photographer (Don Walters), and Edwin Max and Dorothy Love are amusing enough as a childish elderly couple on their way to visit family.

Have I made this sound good? It's not. Not really. But it's not terrible either, thanks to the intentions of Sachs and the moments that it gets right. It somehow does just enough to keep things decently paced, and there's an enjoyably low-key and slightly unsettling coda.

The Incredible Melting Man is still a title that I think most horror movie fans should check off their watchlist, if only for those Rick Baker effects. It's just a shame that it comes nowhere near to living up to the title, and will always be below the likes of Street Trash and Body Melt (and any other melty-fleshed features I am currently forgetting about, although all of them sit in the shade of the gloriously gloopy Society). 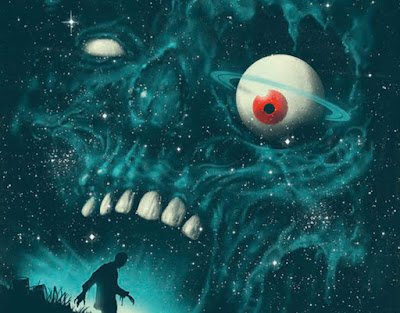