There were two movies made in the mid-2000s that were based on TV shows that were, in turn, based around a car in a starring role. Well, two that I can recall, off the top of my head. Starsky & Hutch was the first, in 2004. The second was this one. It's not really a surprise to find that both were reworked for comedy. It's also not really a surprise, for those who know how easily pleased I am, that I tended to enjoy both. What IS surprising is that this film turned out as well as it did, considering who was involved in front of the camera.

Mind you, with taste being as subjective as it is, the very people I enjoy seeing in this movie may be the very reason that others never want to see it, and think it should be consigned to the bargain bin section of Hell. And if you're already thinking that then you should probably not rush to see it.

Johnny Knoxville and Seann William Scott play Luke and Bo Duke, the rough 'n' ready heroes of our story. Well, they are the characters that we tag along with, and they are the humans who look set to put a spanner in the works of any plan by 'Boss' Hogg (Burt Reynolds), but the real star is the General Lee, the car that Bo uses to cause vehicular carnage and stay one step ahead of pursuing baddies, or those wanting to shoot Luke because of his unchecked libido.

Directed by Jay Chandrasekhar (of Broken Lizard fame), this works well because of good casting, gags that range from decent to groan-inducing, and a number of sequences that allow for some great car stonework. You also get appearances from many of the other Broken Lizard troupe members, which helps.

Written by John O'Brien, the script manages to retain the essence of the show thanks to the way it uses the main characters, even while twisting them all slightly to up the comedy quotient. Knoxville and Scott may not be your favourite actors, and may not be absolutely perfect in these roles, but they're a decent fit for a couple of moonshine-running lads who can always try to excuse the irritation they cause with a big grin and air of childishness.

The rest of the cast fit just as well, whether it's Jessica Simpsons turning heads as Daisy Duke, Burt Reynolds as the villain of the piece, M. C. Gainey as his main henchman, who also happens to be the local Sheriff, and Willie Nelson as Grandpa. There are also fun turns from David Koechner, James Roday (playing a cocky ex-resident of the county back to take part in a local race), an underused Lynda Carter, and one or two others.

The soundtrack has some great selections, the chase sequences are genuinely entertaining, and the plot feels like the kind of thing that could have happened in a feature-length episode of the show, which is sometimes the best you can hope for from a movie reworking a beloved TV show from the past. This may not be the best film that anyone here is involved with, but it's fun stuff, nothing more, nothing less.

You can buy the movie here.
Americans can get a double-pack here. 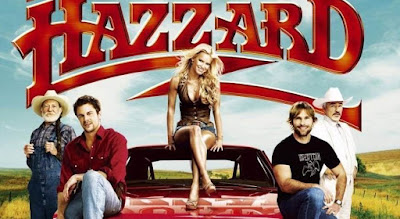