A bit of a change of pace for director Jacques Audiard, The Sisters Brothers is an enjoyable dark comedy Western that benefits immensely from two central performances from Joaquin Phoenix and John C. Reilly.

The two play the titular brothers, men who end up on a quest to chase down two men (played by Riz Ahmed and Jake Gyllenhaal) who may be on to a winning formula for gold prospecting. They encounter difficulties along the way, of course, caused by people who want to end their lives, and the excessive drinking of Charlie.

Although featuring all of the usual things you expect to see in a Western, this is atypical in the way the characters are shown and the situations developed. Our two leads are not on some honourable quest, for example. They are being sent after men by a figure known as The Commodore (Rutger Hauer). Loyalties change, character flaws are not fixed in any major moment of redemption, and you never expect anyone to ride off into the sunset.

Reilly and Phoenix may not be two actors you would think of pairing up as brothers but both work really well in their roles, with the former being slightly in the shadow of the latter, although both can step up to the mark when guns need drawn and the bullets start flying. Ahmed is very good as the young man out to make his fortune with brains over toil, and Gyllenhaal is equally good as the man who does his best to stick close to him. You also get a good selection of supporting players, with enjoyable turns from Rebecca Root, Allison Tolman, and the smallest of roles for Carol Kane.

The script, co-written by Audiard and his frequent collaborator Thomas Bidegain (based on the novel of the same name by Patrick DeWitt), is strong. Characters are fleshed out very quickly, with more being added to them as the plot winds from beat to beat, and there are some cracking lines of dialogue (a favourite of mine being Phoenix talking to the citizens of a town named Mayfield).

The direction is also strong, as you may expect if you've seen anything else from Audiard. He keeps everything feeling firmly rooted in the genre while giving most scenes enough of a little twist to make it all feel slightly different from the norm and fresh. There's also some typically wonderful music throughout from Alexandre Desplat (another favourite collaborator of Audiard) and some nice cinematography throughout from Benoît Debie, making a lot of the more unpleasant moments seem more palatable.

Here's a disc.
And Americans can get it here. 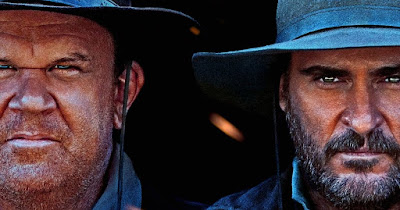