Here's the thing about my movie reviews. I often forget to mention the musical scores, I am woefully forgetful when it comes to namechecking people like cinematographers and designers (people that are vital to helping the director create their vision), and I don't always write essays based around the themes and subtext of the more meaningful cinematic classics I have watched over the years. Sometimes I try, don't get me wrong, but I'm often aiming to just relay a general feeling about the films I have watched. My reviews are often just about my reaction, as opposed to being a full dissection. Sometimes I manage to pack a bit more in there, and am always happy when the thoughts and words flow well for me, and sometimes I am happy that I am watching another film that doesn't really need such thoughtful criticism.

Denise Richards plays Gretchen Blair, a female FBI agent who has boarded a flight after having a very bad time of things recently. She gets angry at an inconsiderate idiot who has ended up sitting in her seat and ends up being taken to first class. Result. Sitting alongside a man named Terry (Kirk Barker), her moment of happiness is short-lived. Some people want Terry, or at least what he has hidden away from them, and that means that they want to take control of the flight. Greer Grammer is the woman in charge of the criminal plan, and Dolph Lundgren is her right hand man (although she also has other muscle on hand, with the most recognisable being Chuck Liddell).

Altitude is preposterous. Of course it is. The characters are all ridiculous clichés, very few moments are plausible, and it's a film in which viewers have to accept Richards as the strong and smart goodie up against Lundgren.

Director Alex Merkin tries to keep everything moving along zippily enough, throwing occasional distractions in (like Jonathan Lipnicki as an over the top, dancing and singing, air steward) to break up the overly familiar plotting as we get the opening situation that puts our lead in need of a rest, an overview of the plane and the passengers, developing awareness of the dangerous plot, etc. The script, by Jesse Mittelstadt, also helps here, with the material sadly growing weaker when the actual action starts to take place. Neither Merkin nor Mittelstadt can do enough to get this anywhere close to any of the other, superior, plane-based action thrillers that we've already seen over the years. And some of the dialogue is either laughably cheesy or cringe-inducing, depending on your mindset.

Richards is okay in her role (although I did spend the majority of the movie squinting at the screen and asking myself "is that Denise Richards?"), and Barker is fine, if fairly bland. That leaves it to the villains to liven things up. They don't quite manage it, mainly due to the fact that Granmer plays her role in a way that makes you wish someone had been able to negotiate a fee for Krysten Ritter, and also the fact that Lundgren is sorely underused (he spends most of his screentime actually flying the plane). The least said about Liddell the better, but it's worth mentioning Jordi Vilasulo, who does a decent job as the air marshall who gets involved in the situation.

You could do a lot worse if you're after a mindless slice of action, which is all it is trying to provide. I'll watch anything Lundgren does, he improves pretty much any film that he stars in, and this may not be one of his better films, but it's still a fun one.

You can pick up the film, under the name "Hijacked", here.
Americans can get it here. 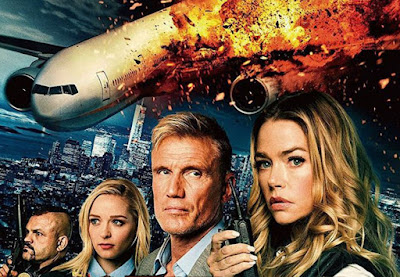