Unicorn Store is a slight jumble of a film but it's also a sweet and enjoyable one, thanks to a great lead turn from Brie Larson (also making her feature directorial debut).

Larson plays Kit, a young woman who we see growing up in a montage that focuses on her love of art, right up until the day that she is told her work is not good enough. That leads to her moving back in with her parents (played by Joan Cusack and Bradley Whitford), becoming a temp agency worker, and generally resolving to get on with a bland adult life. Until she is invited to a store by a mysterious salesman (Samuel L. Jackson) who tells her that she has been picked to receive a unicorn, but only if she can prove that she is ready to accept one.

Written by Samantha McIntyre, Unicorn Store is anything but subtle, and perhaps falls too in between a couple of main demographics to fully appeal to many. Kit is every dreamer who has ever been given that cold splash of water in the face by people telling them that it is time to grow up and get serious. This happens to her as a young adult, but the way she clings on to hope and bright fantasy puts her more in line with teenagers who have yet to be worn down by the grind and grit of daily adult life. She seems very childish at times, yet it's also easy to see her behaviour as something we would all like to regress to, at least occasionally. Admit it, if you're a parent who has been having a hard time of things lately then it's not just your children who enjoy the times when you let them build a blanket fort and have a day away from the outside world. You join them and remember what it was like when it was so much easier to keep things much simpler.

Larson directs well enough, although it's all very similar to so many other independent movies we've seen over the years, in terms of the quirky characters, developments, and main lesson learned. It just has some big names to help carry the material and make it seem a bit more mainstream.

Leading lady aside, who is as good as she usually is, the highlights include Cusack and Whitford as caring parents who Larson feels are constantly disappointed by her, Hamish Linklater as an odd and awkward boss, Karan Soni as an old friend who seems to have made a great success of his life, and Mamoudou Athie as a hardware store employee who ends up helping Larson to prepare her home for the arrival of the unicorn. Jackson is a lot of fun as the salesman, although it feels like the role is designed more for Jackson to have fun than any other reason.

A unicorn is different things to many people (I still love the fact that here in Scotland it is our national animal) but it's also always symbolises something magical, pure, and very difficult, often impossible, to attain. That may be someone you love, it may be having the time and resources to create your art, or it may even be a sense of acceptance for your current situation in life. Whatever it is, once you prepare well enough for it, you can take a moment to enjoy it. And then maybe help others to find their own.

Fans of Larson can buy Room here.
Americans can buy it here. 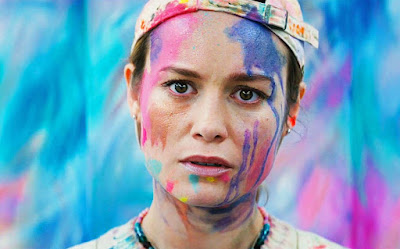