Christmas is the time of the TV movie, as many people will know (both from the schedules and also from the reviews that appear every December here on my blog). 12 Dates Of Christmas is yet another one of the many that seem to be churned out year after year, and it's yet another one that doesn't stand out from the crowd.

Amy Smart has the lead role, an actress that many people like well enough, but someone I have always really disliked since watching her almost bring down The Butterfly Effect with her poor performance in a role that many, more talented, actresses would have done much more with. But I digress. In this confection she plays a young woman named Kate Stanton. It's Christmas Eve and Kate really wants happiness in her life. And what does every young woman in a TV movie need when searching for happiness? Yes, of course, a man. Because we all know that single people can never be truly happy. Especially single women. In fact, there was a memo sent around a few years ago to remind everyone that the very thought of a happy single woman is enough to shake the very pillars of the ABC programming department and bring the whole world to a point of fiery implosion. But I digress again, sorry. Anyway, Kate is a bit controlling and aloof, so when she is set up on a blind date with the lovely Miles (Mark-Paul Gosselaar) she spoils it all by dwelling on her ex, Jack (Benjamin Ayres). And then at midnight, she is taken back to a moment on Christmas Eve and giving the chance to spoil it all again. Which she does. And again. And again. Until she starts to think on the error of her ways and maybe change things for the better.

Yes, it's Groundhog Day at Christmas. Kinda like Christmas Do-Over. But that's okay, because wibbly wobbly timey wimey stuff has been an important aspect of Christmas fantasy tales since the classic A Christmas Carol, so it's not as if Groundhog Day was the one that came along first. Good Dickens, no.

Writers Janet Brownell and Aaron Mendelsohn (adapting the story by Mendelsohn and Blake J. Harris) take the premise and do what you'd expect them to do with it. Kate at first tries to correct things in the way that SHE thinks is best, then she has a bit of fun, and then she struggles to find a way to end the repeating cycle. Director James Hayman gets the camera pointing and shooting the right way, with a standard swirly move to show the trip back in time whenever it gets to midnight. There's nothing spectacular here, and none of it is remotely believable, but it's perfectly fine TV movie stuff.

Smart certainly grows as the movie progresses, but it's hard to like her during the first half of the movie (which, I guess, is kind of the point). Gosselaar is a nice enough guy, I suppose, but so is Ayres, because this is all about the change needed in Smart. Jayne Eastwood stands out among the supporting players, portraying an elderly neighbour with a good heart.

Put someone, anyone, in the lead role instead of Smart and this could have, just, been a good bit of entertainment. As it stands, it's distinctly below average.

It's not even out on DVD, egads, so look at this selection, if you must - http://www.amazon.com/Holiday-Romance-Collection-Movie-Pack/dp/B00DNLZRLU/ref=pd_sim_mov_2 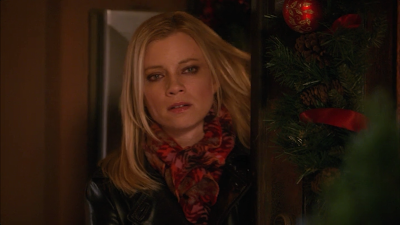