There. End of the review. I'm done with this series, at last.

You want more? Some elaboration? Well, only if you promise not to burst out laughing while I describe the basic premise. Alright, you don't have to promise, but just try your best.

Young Derek (William Thorne) stops speaking right after he sees his mother's boyfriend killed by a Christmas toy that was delivered to their house. His mother (Jane Higginson) obviously wants her boy to get all better. Not realising that the death was caused by a toy, she takes him to the local toymaker (Joe Petto, played by Mickey Rooney . . . . . . . . . . Joe Petto . . . . . . . get it?) and tries to buy him a small piece of well-balanced mental health. That doesn't work as well as she'd hoped. Meanwhile, more people are killed by toys, but in such a way that the cause of death usually remains a mystery or is deemed an accident.

Using a movie clip from the previous movie to tenuously link it into the franchise (and there's also a fleeting appearance from Neith Hunter, playing Kim once again), this is a standalone Christmas horror movie that had the potential to be a lot of fun. Imagine the possibilities for nastiness in a story that involves someone deliberately creating killer toys? A yuletide Silver Shamrock. Unfortunately, the potential is never realised, thanks to a pervading sense of laziness, a lack of any decent gore (apart from one moment that features some eyeball trauma), and a move to focus, instead, on another main plot element that is so silly that it completely undoes the third act.

The acting is competent, I guess, from most people onscreen, although Rooney really goes over the top at every opportunity, and he's matched by the actor playing his son (Brian Bremer). Brian Yuzna and Martin Kitrosser wrote the script, with the latter also directing the silliness, and Screaming Mad George is on hand to provide some special effects, which is a great shame as his talents are just as wasted as the initial premise.

Like many other horror franchises, this is one that didn't have any reason to exist. It limped along after the first movie, and we can all just hope that this fifth movie remains the last of the sequels. 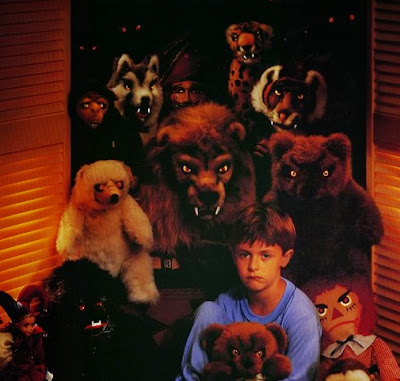