It turns out that Ricky Caldwell, the killer in Silent Night, Deadly Night Part 2 isn't dead. Nope, he's just been in a coma for some time, allowing him to change into Bill Moseley (taking over the role from Eric Freeman) and establish a psychic connection with a blind girl named Laura (Samantha Scully). Laura is about to head to her grandmother's place for the holidays (with her brother, played by Eric DaRe, and his girlfriend, played by Laura Harring), which also seems to be the cue for Ricky to get up and start killing people again. And we all know who he's aiming for.

Directed by Monte Hellman, this is laughable stuff from start to finish. The script, by Carlos Laszlo, makes no effort to shoehorn any logic into the proceedings, which means that everything simply develops from the ridiculous into the more ridiculous.

Whether it's the fact that this killer moves even slower than any other onscreen killer that I can think of, the whole cast of characters being so hard to care for, or even the scene when someone stops to give a lift to a man hitch-hiking, despite the fact that his brain is visible through the liquid-filled jar contraption sitting at the top of his skull . . . . . . . this film provides plenty of unintentional (?) laughs.

Moseley is given nothing to do, besides shuffle around very slowly and kill people occasionally. Scully is required to act blind and throw out sneering comments every other minute, which she does. Eric DaRe is fine, but I was much happier with any scene that featured Laura Harring (billed here as Laura Herring), simply because I have a big crush on her. Robert Culp is a cop trying to get to Caldwell before he kills again, and Richard Beymer is the doctor who may have accidentally created the link between the killer and his target.

Not quite as bad as the movie that preceded it, but it comes close. Thankfully, if you watch it in the right frame of mind then you will find plenty to enjoy. Just not in the way that the creators intended. 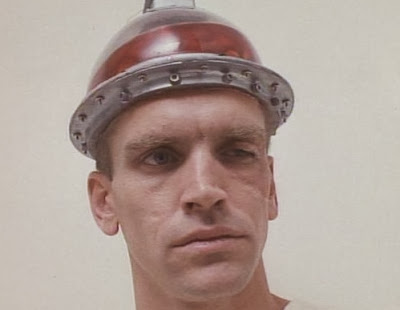