AKA Night Of The Dark Full Moon.

It's funny what you discover on a never-ending journey through the years of cinema. For example, I'm a HUGE fan of Halloween. It's one of my favourite movies of all time, and my favourite horror movie. But I admit, as much as I love Carpenter, that it was hugely influenced by many films to come along beforehand. People argue over the real starting point of the slasher movie subgenre, from Agatha Christie adaptations to Mario Bava's Blood And Black Lace, but there are some who quickly cite Bob Clark's work in Black Christmas as a way to undermine the classic created by Carpenter. Strange that few of those people seem to then explain that Clark MAY have been influenced by this movie, a slasher set around Christmastime (albeit without obvious decorations and seasonal details everywhere) that features a lot of POV camerawork.

Mary Woronov plays a young woman named Diane, who ends up in the middle of a very dangerous situation. It's all to do with a house that was once owned by Wilfred Butler. His grandson, Jeffrey Butler (James Patterson), is arranging to sell the house, offloading it at a bargain price, but it seems that someone, perhaps even Jeffrey himself, wants a number of people to die before the house is handed over to a different family. Diane is the daughter of Mayor Adams (Walter Abel), one of a number of people drawn to the house by the scheming killer, and she ends up teaming up with Jeffrey, despite her suspicions, while she tried to figure out exactly what is going on.

Written by Jeffrey Konvitz and Ira Teller, this is an enjoyably twisty and twisted tale that simply undoes a lot of good work by being a bit too convoluted and reliant on the backstory, a backstory revealed in the third act via a flashback that lasts for quite a while. If the writers had found a way to spread this backstory throughout the movie, instead of throwing it in there in one big lump, then things would have been greatly improved.

The cast isn't chock full of great actors, but genre fans will enjoy Woronov in a lead role. Patterson is quite good, suitably shifty and sweaty while viewers decide whether he's good or bad.

Director Theodore Gershuny keeps things dark and grimy, which is both a plus and a minus for the movie. He does well, and the film does deserve to be seen by a wider audience, but there are a lot of minor flaws that add up to detract from the overall experience.

Unfortunately, I don't know the actual quality of the disc, so try to pick this up as cheaply as possible, until it (maybe) gets special treatment one day - http://www.amazon.co.uk/Silent-Night-Bloody-DVD/dp/B00096J1KA/ref=sr_1_2?ie=UTF8&qid=1388174003&sr=8-2&keywords=silent+night%2C+bloody+night 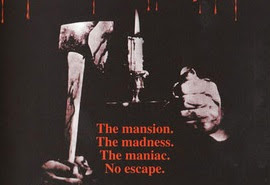