Twelve Trees Of Christmas is exactly what you expect from a Christmas TV movie. That's not to say that it's bad. If you don't want to watch something that's safe and sweet then you'll hate it, of course, but it's actually not a painful viewing experience if you've sat through as many Christmas-centric movies as I have.

Lindy Booth plays a young woman who wants to save the library that she works in. The man responsible for it being due to close (Robin Dunne) initially thinks that she is just out to save her job, but it soon becomes clear that the library is more than just a place of employment. It's a hub for the community. A competition is organised, with people competing to design the best Christmas tree. Who will win, and will the endeavour actually change anything?

Directed by Michael DeCarlo, and written by Kevin Commins, this is flat, predictable and doesn't even build up to any hugely satisfying finale. Yet, somehow, it's just easy to watch and almost enjoy. I say almost because I can't, in all honesty, rate this as anything but completely average, but it wouldn't have taken much to push it up into the realm of the good. A sharper script and some better editing, because it never seems to live up, would have done it.

A better cast might have helped, but those onscreen don't do too bad. Okay, I have to admit that Lindy Booth isn't the strongest female lead, but I like her well enough. Dunne is enjoyable, and it's good to watch the two main characters butt heads without Dunne being painted as a big meanie from start to finish. In fact, his character comes over as quite a nice guy who has made a bad decision that he felt was necessary. Shauna MacDonald lends some nice support, and Melanie Brown plays a ruthless designer enlisted by Dunne to design HIS entry for the competition. Uneven accent aside, Brown is amusing enough. And Casper Van Dien may only be in the film for about a minute, but I like him enough to still mention him in this review. So there.

If you don't like any of the cast, or the title, or Christmas movies, in general, then just give this one a miss. But if you're wasting some time with yuletide viewings at this time of year, this isn't the worst that you could choose. 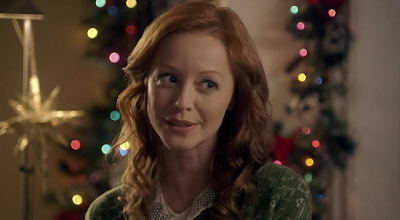